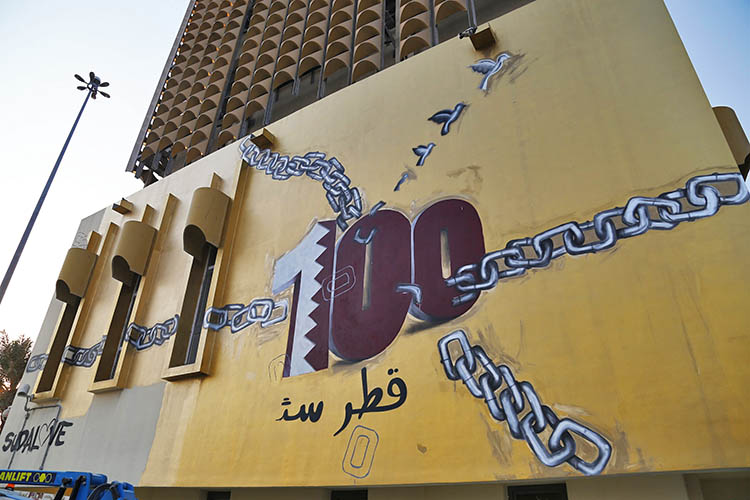 The powerful artworks, which are showcased on the façade of the Fire Station building, reflect each artists’ personal take on the blockade. The medium of choice was graffiti, evoking its origins as a form of activism and self-expression, which is easily accessible by the broader community.

The artists involved in this initiative are Mubarak Al Malik, Ali Al Kuwari, Dimitrje Bugarski, Thamer Mesfer and Assil Diab. Each artist produced an artwork which highlighted an aspect of the blockade, resulting in a series of outdoor installations that tell the story of the blockade to audiences in the most creative manner.

Artists are always inspired by their environment, they’re typically moved by a significant moment or event, such as the one we’re all experiencing now – the unfair blockade on Qatar. These five talented artists used their creativity to produce fantastic works that best express how they feel about the present political situation, through an art form driven by the need to speak out and share one’s opinions in expressive and accessible ways.’

These five artworks represent the first stage of the ‘100 days of blockade’ initiative, which was launched by Qatar Museums under the patronage of its Chairperson, Her Excellency Sheikha Al Mayassa bint Hamad bin Khalifa Al Thani. The initiative provides an opportunity for those living in Qatar to express their feelings on the blockade through creative means.

As part of the second phase of the initiative, QM is currently accepting proposals from artists based in Qatar that would like to submit an artwork that showcases their support for the country during this historical time. Following the September 15 deadline, selected artists will get the chance to produce a mural on a bridge, tunnel or wall within the country.

A judging committee, with members from the Fire Station and Ashghal, the Public Works Authority of Qatar, will convene to select the best proposals, which will then be showcased throughout Qatar.

This initiative comes as part of QM’s commitment to inspire and nurture talented artists, as well as support and celebrate the nation’s unity through art.