A Closer Look At The Porche Cayman S

Exterior The new Cayman is more distinctive than ever. Proportions are new, yet it is clearly a Porsche sport coupé; its styling is marked by precise lines and razor-sharp sculpted edges that emphasise the low, extended silhouette with windscreen shifted forward and roof line that reaches far back. Especially expressive and characteristic are the dynamic recesses in the doors, which guide induction air into the distinctive air scoops on the rear side panels and then directly to the engine. 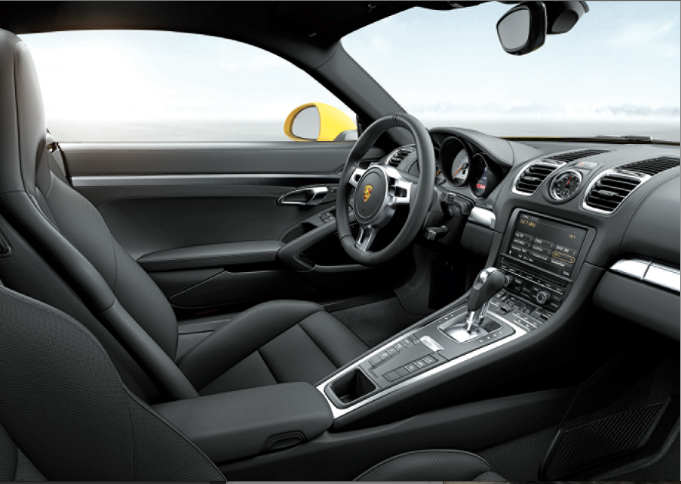 Interior Centre console that ascends towards the front with its motorsport-like high-set gear shifter gives the driver the feeling of being fully integrated in the interior. The standard audio system with its seven-inch touchscreen centrally located further upwards is very easy to see and offers convenient access to many different functions; latest audio and communication systems; high-end Burmester Surround Sound System; climate controlled seats

Safety Every system, suspension, chassis, cabin and power delivery is meticulously engineered to increase performance, driver satisfaction and efficiency and to strengthen the active and passive safety capabilities of the car

Porsche recently celebrated the world premiere of the new Cayman. The third generation of the Cayman has been re-engineered from the ground up – it is lower and longer, lighter and faster, more efficient and more powerful than ever.

The two-seat sport coupé is now available in the two classic Porsche versions: Cayman and Cayman S. A longer wheelbase, wider track and larger wheels enhance the driving performance of the mid-engine sports car to a level without equal in its competitive class.

Under its lightweight body in aluminium and steel mixed material design, one of two highly efficient flat-six cylinder engines is mounted just in front of the rear axle, which delivers even more propulsive power with even better fuel economy than before. The Cayman is powered by a 2.7-litre engine with 275 hp; with the Sport Chrono package it accelerates from a standstill to 100 kph in 5.4 seconds. The 3.4-litre engine of the Cayman S produces 325 hp; with PDK and the Sport Chrono package it finishes the 0 – 100 kph sprint in 4.7 seconds flat.

From the front end, the new Cayman is marked by its dominant cooling air inlets, which increase in size towards the sides of the car. Integrated in them, far outboard, are the round front lights with four-point daytime running lights or position lights, an unmistakable identifying feature of the new Cayman. Just as unique to the new generation of the sport coupé are the large, low rear boot lid made of aluminium and the rear section with its wrap-around edges. At the upper end of the rear window, an LED brake light spanning the entire window width warns traffic behind. Mounted directly to the rear lid is the thin blade of the rear spoiler, which – in contrast to that of the Boxster – is higher and deploys at a steeper angle. The overall appearance of the Cayman is more independent than before, and it is well-differentiated from the previous model.

So many innovations. Same driving excitement. Just that now there’s even more. If you need to be convinced, the showroom is on Airport Street!

Marhaba Feature: The Power of Dates

MOI Targets Motorists Who Use Phones Whilst Driving

Posted On July 28, 2016
Motoring And Transportation

Posted On April 17, 2016
Motoring And Transportation