Sheikh Faisal bin Qassim’s museum was established in 1998, and today, it is the ideal destination to get a glimpse of Qatari heritage and culture.

Located in Al Samariya, 22 km from Doha’s centre, the museum sits on Sheikh Faisal’s vast family farm. It was established to be a protective and preservative centre for the national heritage of Qatar and Islamic Arts and to share in the Qatari people’s commitment to their national heritage and realise their aspiration to have a place that celebrates and expresses cultural pride. The museum is designed in accordance with traditional Qatari architecture with turrets at each corner and was constructed using local Samariya stone.

The museum was born out of Sheikh Faisal’s passion for history, as well as a sense of duty and responsibility to preserve his nation’s heritage. His childhood expeditions with his father to discover the museums in the Gulf region and around the world helped realise his passion for preserving culture and heritage. Sheikh Faisal first started accumulating artefacts such as fossils, stamps and toys at a very young age. He later inherited a vast antique collection from his father, Sheikh Qassim bin Faisal Al Thani. 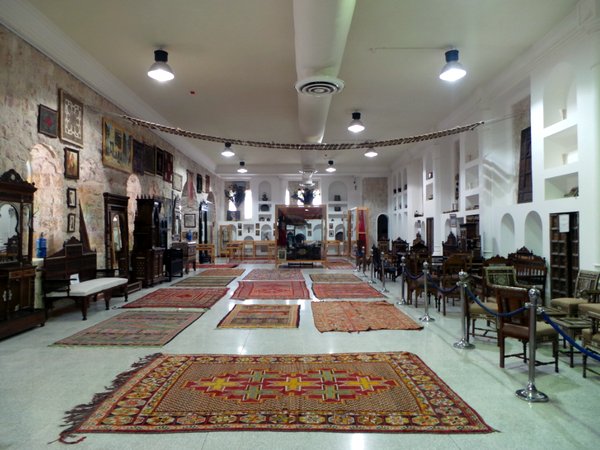 The section on Qatari Heritage maintains an authentic depiction of the way of life of the people who used to live in Qatar in older days. It has a display of wooden boats, fishermen’s equipment, pearl diving equipment and different types of fabric. It also exhibits the culture and heritage of the Bedouin community that existed in Qatar (below). It presents the many facets of the distinctive Bedouin way of life, their customs, and occupations.

The Traditional Qatari replica house represents a typical family house before the oil boom. The architecture of a Qatari home reflects the cultural heritage of Qatar which was dictated by basic social values and other functions such as religion, privacy and the extended family. However the economic boom which ensued after the discovery of oil witnessed the disappearance of local architecture.

The Al Rayyan section exhibits weaponry that was utilised during the Al Wajba battle in 1893 that was fought between Qatar and the Ottoman Empire. The Ottomans lost a significant number of soldiers, and many of them were held captive and victory was for the Qatari forces. The collection also includes weapons from the British colonists and from countries around the world.

Sheikh Faisal’s museum also holds a collection of traditional wooden boats and dhows (below) which played an important role in Qatar’s economic history. Qatar’s economy during the 20th century depended mainly on fishing and pearling since they were the single most important sources of income. The Tawash (an ancient pearl merchant) would try to negotiate different packages and deals with the pearl divers to convince them to work for him and would go as far as providing funding for the fishing vessel and providing the families of the pearl divers with financial support until they got back from their expedition.

The museum has an extensive vehicle collection which comprises vintage and classic cars and includes a steam car from the latter part of the 19th century. The vintage car models range from the years 1924–1950. The models displayed are the Ford T, Chevrolet, Baby Ford, Desoto, Ford TT26, Dodge, Buick and Mercedes-Benz. Some of the vehicles in the collection have been collected by Sheikh Faisal during his travels around the world and some have been acquired from prominent Qatari families. In addition to vintage cars, the collection also includes bikes, motorcycles, trucks, and old registration plates.

An immense collection of Islamic and Pre-Islamic coins and bank notes are displayed in the third building. Some of the coins date back to the Lydians (people living in Lydia, a region in western Anatolia) and Iron Age Kingdom, in western Asia Minor in the 7th century B.C. The collections of bank notes are primarily from India, Palestine, China, Zanzibar, Maldives, and Algeria.

The museum also houses a collection of fossilised elements such as dinosaur jaws and features an extensive range of findings from the Sahara, corals, meteorite pieces, different types of minerals and preserved butterflies.

The House of Religion is an intriguing section that holds a collection of various objects and symbols of faith from myriad religions and sects; this part of the collection is an expression of Qatar’s renowned respect for cultural and religious diversity. The collection includes silver church goblets from France, a Hebrew inscription on leather, a confession cubicle, rugs with the Portrait of Saints, and a manuscript of the Holy Bible from the 18th century, along with many others.

A vast collection of paintings and photographs by artists from Qatar and the Gulf region that emphasise the aesthetics of the traditional craft and the value of the Arabian heritage is exhibited in the Qatari Fine Arts division. Fine arts are an eminent part of the Qatari culture. Qatari artists have significantly contributed to the development of the arts culture in the nation.

Visiting: The team at the museum prefer it if you make an appointment before visiting. You can pop in if you’re just driving past, but it is best to call ahead even by just an hour. You can do so by phoning 4486 1444 or emailing [email protected]. Opening hours are 9 am – 6 pm every day except Sunday and Friday. Entry is free.

Location: The museum is located on Sheikh Faisal’s family farm in Al Samariya only 22 km from Doha.

The museum is on your left – it looks like a huge fort. Take the next exit on your right which is the same exit you take for the Camel Races. Instead of turning right to go to the race track, do a u-turn and head back towards the city. Drive for about 7 km, past a palm tree plantation on your right (basically looks like hundreds of walled-in palm trees).

Eventually you’ll see another white sign on your right pointing to the museum. Turn right and the museum is about 1 km up a tree-lined road. At the moment there are road works so you’ll have a confusing detour – just head for the tree-lined road perpendicular to the highway. Once you’re inside the gates, the museum entry is to the left of a man-made lake. Don’t drive up any ramps – the entrance is on ground level. Walk through the large wooden doors and a small reception desk is on your right.

Posted On 9 May 2021
Discovering Qatar