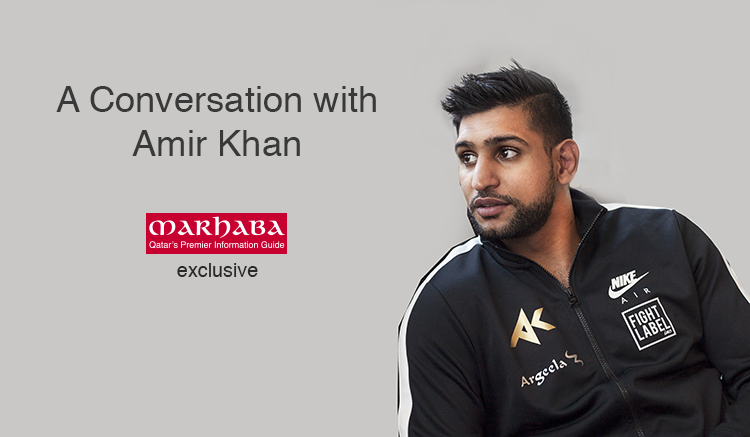 A Conversation with Amir Khan

Marhaba was privileged to be given an interview with Amir Khan, well known to those who follow boxing and to many young people as a role model, in the midst of his heavy schedule on his visit to Qatar, specifically in connection with the 2015 AIBA World Boxing Championships currently taking place in Doha.

Amir has enjoyed spectacular success from an early age. As he admitted himself, as a youngster on the streets of Bolton in Greater Manchester, UK, he had an abundance, an excess even, of energy. But through a combination of professional support and keeping to traditional family values and presumably some good fortune, this hyperactive kid – boxing competitively from the age of 11, no less! – channelled his energy and will to succeed into a successful boxing career and amazingly became the youngest ever British Olympic Boxing medalist at Athens in 2004. He was only 17 and in fact was the only boxer Britain had in its Olympic team. Pretty unique.

After 101 victories in his amateur career, and after satisfyingly avenging one of his few defeats by beating the Cuban opponent who took the gold medal at Athens, Amir went to become one of the youngest professional British world champions when he won the WBA welter weight title at the tender age of 22. Since then he has beaten nine world champions, has been world champion himself twice and, right now, he is the leading contender for the next world championship fight as he currently holds the WBC Silver welterweight title. Amir hopes that negotiations can be finalised soon to enable the fight to be held early in the new year.

Yet, looking at Amir, you would not believe he has been fighting for the past 18 years. He could be a typical young, handsome and successful TV or film star.

Easy to talk to, what quickly emerges is how grounded he is, how he is a devoted family man, how he still values his family and its traditions. In fact, his father, Mr Shah, was with him in Doha and has been with Amir as his manager from the very first amateur days.  Being now a family man with a baby daughter, Amir says he takes his work even more seriously, and works out with his trainer every day even while he is here in Qatar.

Perhaps looking back at his own childhood, and the difficulties of achieving personal goals while growing up in a relatively poor area not over endowed with facilities to help kids ‘work off steam’, it is gratifying to see how much effort Amir now devotes to helping young people and supporting vital causes, like child safety, improvements to the judicial system, and ending violence towards women. In addition to campaigning for these kinds of measures which would help improve the social development of young men in the community, he has also worked hard on the global stage to help those devastated by the Indian Ocean tsunami, the Kashmir earthquake and recently helped raise huge amounts by supporting Islamic Relief’s Philippine Appeal in the wake of typhoon Haiyan.

Marhaba would also like to thank Gelareh Azizi, who was instrumental in arranging this interview. in fact we are proud to have met such a world-class star who is so friendly and easy-to-talk to and yet who, after achieving so much success and with a continuously busy schedule, still values friendship and family and finds time to help people who have been disadvantaged in their life through no fault of their own.