Jaidah Automotive, the official distributor of Chevrolet in Qatar, launched a brand-new digital campaign to support one of Qatar’s top athletes – Mutaz Barshim – at the IAAF World Athletics Championships Doha 2019.

As part of the campaign, Chevrolet Qatar released a video that showcases the star athlete walking into a loud, cheering audience, symbolising his path towards IAAF 2019. The concept of the video was aligned with the arrival of the new performance Sport Truck products from Chevrolet in 2019, starting with the Tahoe RST equipped with a 6.2-litre engine, 10-speed automatic transmission and a few other performance bits; followed by the Silverado RST in May.

Speaking to the video’s audience, Mutaz sought to empower aspiring athletes like himself, saying:

If you want to be the best, if you want to succeed, you’ve got to keep trying. There’s only one beast and the beast is you.’

The digital campaign builds on Jaidah Automotive’s sponsorship of the athlete who was announced as Chevrolet’s brand ambassador earlier this year. The sponsorship will see Jaidah Automotive supporting Barshim during the IAAF and the 2020 Summer Olympics. As part of the sponsorship, the company will also host several sporting activities for children and families – particularly during the upcoming Qatar National Sports Day. 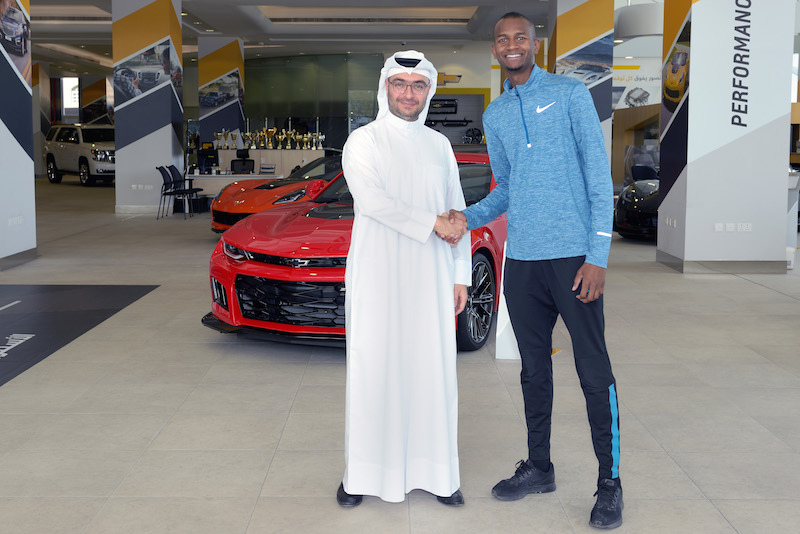 Mutaz Barshim is a prime example of the dedicated and hard-working Qatari talent who make our country proud. He is an inspiration on so many levels to the up-and-coming generation of young Qataris. We are not only Mutaz’s official sponsors, but we are also his biggest fans – we look forward to supporting him in his athletic journey as he continues to represent Qatar in some of the world’s most important sporting competitions.’

The IAAF World Athletics Championships is a biennial athletics event organised by the International Association of Athletics Federations (IAAF). The 2019 Qatar edition marks the first time that a Middle Eastern nation hosts the event. The venue is the Khalifa International Stadium which was recently renovated in preparation for the 2022 FIFA World Cup.

Mutaz Barshim is Qatar’s most decorated athlete receiving the country’s first-ever silver medal at the 2016 Olympics in Rio de Janeiro and a bronze medal at the 2012 Olympics in London. His achievements led to him being named as the 2017 IAAF Male Athlete of the year.

Chevrolet Qatar is proud to share that Mutaz Barshim has been qualified for the IAAF finale taking place this Friday 4 October at 8:15 pm. Tickets can be purchased online and various locations around Qatar.

The full video of Mutaz Barshim as the official Chevrolet sponsor is available on Chevrolet Qatar’s Instagram page @chevroletqatar through the following link: https://www.instagram.com/p/B26LwecgTAa/. Call 8000 100 or visit chevroletqatar.com for more information about Chevrolet cars available in Qatar.

Champion of Champions – Modern Pentathlon to Launch on 26 October 2013

David Walker Wins the Third Round of Qatar Challenge

All You Need For A Stylish Ladies Night: Pearls. Bubbles. Heels.