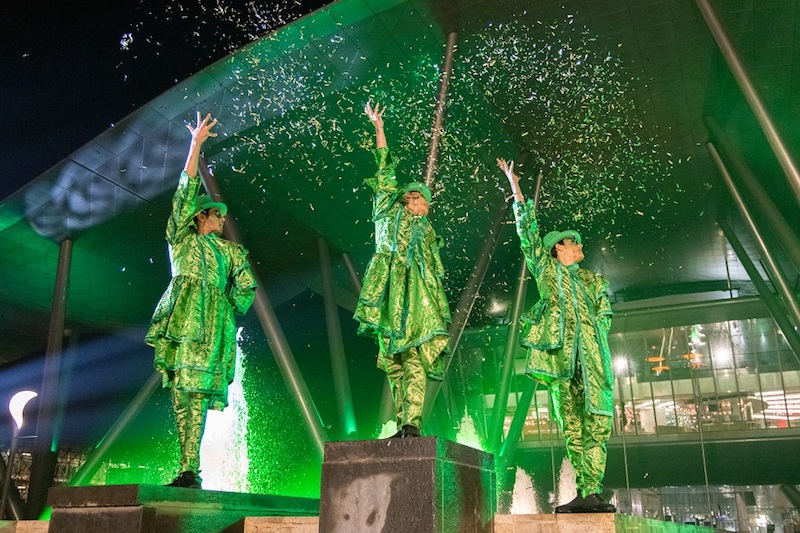 The creativity and artistic talent of students from Qatar Foundation schools who are bringing back a performing arts tradition after a ten-year hiatus will be showcased this week to the local Qatar community.

SHOWTIME! – a Broadway-style musical – has been in the making for 14 months, with production continuing even amidst the COVID-19 pandemic. And now, a documentary telling the story of how it was made is about to receive its virtual premiere, as students and staff from schools under the Qatar Foundation Pre-University Education perform a string of favourites from classic shows, including Mary Poppins and Matilda, against the backdrop of locations around Education City.

The documentary – highlighting the journey and purpose of SHOWTIME! and featuring some of its musical numbers – will be screened via this link at 6:30 pm this Wednesday, 7 April. It will also be available on Qatar Foundation’s YouTube channel afterwards. Meanwhile, the QF Schools Productions team is already looking at how to build on the success of this musical with further initiatives that will focus on showcasing the performing arts in the Arabic language.

Creativity that nurtures skills and mindsets

According to Buthaina Ali Al Nuaimi, President of Pre-University Education at Qatar Foundation, they believe that learning flows both within and beyond the classroom and that giving young learners the opportunity to explore their creativity nurtures skills and mindsets that benefit them both academically and personally.

She said that by reviving the rich tradition of a performing arts programme at QF, which dates back two decades, students have spread their wings and broadened their minds by learning about self-expression, concentration and teamwork, growing in confidence, and showing the resilience required to reach a goal as the production of SHOWTIME! was adapted due to the COVID-19 pandemic.

The experience they have shared will bring value to them for years to come, and the end result is a simply stunning show that illustrates the breadth of creative talent and imagination that exists among the children in our schools.

I hope that the community of Qatar will enjoy the SHOWTIME! documentary, and that all those who made this production possible – especially our wonderful young performers – are as proud of it as we are of them.

The QF students were steered through the SHOWTIME! process by the creative team of Steve and Jane Griffiths, who led the development of similar performances at Qatar Academy Doha between 2000 and 2010, and West End choreographer Christopher Piper, as well as by another QF member Qatar Philharmonic Orchestra.

Rehearsals began in January 2020, with plans for a theatre performance later that year altered when COVID-19 struck. Production of SHOWTIME! has since continued in adherence with public health guidelines, with five professional musical videos filmed at some of the most iconic locations within Qatar Foundation, including the Ceremonial Court and Qatar National Library.

The SHOWTIME! documentary premiere is free to view this Wednesday. The full production is intended to be performed to an audience at a later date, as public health guidelines allow.

The Spa at Mandarin Oriental, Doha Recognised at the Third Edition of Ohlala Spa & Wellness Awards

Finale of ‘It’s Time for Africa’ This Weekend with Nigerian DJ Jimmy Jatt!

HBKU Celebrates the Culture and Heritage of Saudi Arabia

Cultural Shows on the Sidelines of IAAF Tournaments this Friday!