The Qsuite display will be available after the security checkpoint to individuals travelling through Terminal 5, home to Qatar Airways codeshare partner and New York’s Hometown Airline®, JetBlue.

For a limited time only, travellers will have the unique opportunity to experience all the luxurious features found in the patented, state-of-the-art Qsuite, without boarding the aircraft.

Qsuite features the world’s first-ever double bed in Business Class and a new customisable quad configuration that is perfect for family, friends, or business colleagues travelling together, as well as for individual travellers seeking the ultimate in privacy and comfort. The display seats will be fully dressed for flight, and will feature items from Qatar Airways’ extensive Business Class menu, with visitors able to experience Qatar Airways’ world-renowned hospitality firsthand.

Qatar Airways Group Chief Executive Akbar Al Baker, said they are delighted to provide an opportunity to travellers passing through JFK’s Terminal 5 to see for themselves what all the Qsuite excitement is about.

This is an opportunity for passengers flying our valued local partner airline, JetBlue, to explore their options for premium international Business Class travel. We are confident that once they experience Qsuite, nothing else will compare.’ 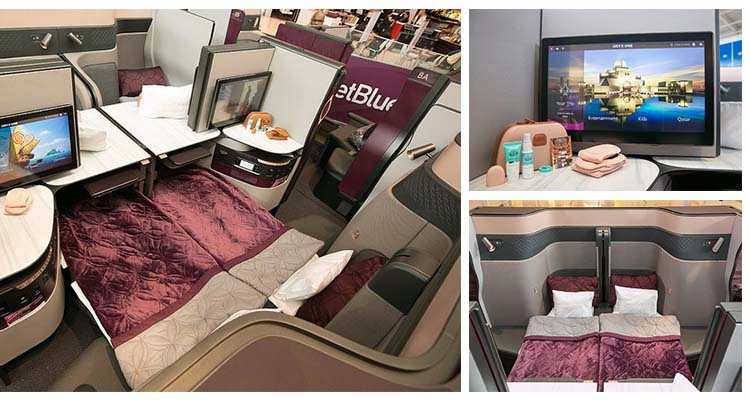 First revealed at ITB Berlin in March 2017, the patented Qsuite allows multiple configurations for passengers to tailor their inflight experience to their specific needs. Aside from the world’s first-ever double bed in Business Class, Qsuite is the airline’s first-ever cabin to offer aft and forward-facing seats, taking cabin innovation to an entirely new level with its quad configuration.

Qsuite empowers passengers with more choice, privacy and personalisation in their travel experience. Sliding panels enable passengers to transform their space into a shared area customisable for groups of two, three, or four, allowing them to work, dine or socialise at 40,000 feet.

Qatar Airways and JetBlue recently announced the expansion of their codeshare partnership. Covering nearly 60 destinations across the US, the partnership offers customers a seamless travel experience and can connect customers via Boston and New York from most cities on the JetBlue network, including Denver, Pittsburgh, Orlando, Detroit or Seattle, onwards to Doha, and to more than 150 exciting destinations on Qatar Airways’ extensive network, including Kathmandu, Bangkok, Bali, Ahmedabad, and Nairobi, among others.

The award-winning airline has received a number of accolades recently, including ‘Airline of the Year’ by the prestigious 2017 Skytrax World Airline Awards, held at the Paris Air Show. This is the fourth time that Qatar Airways has been given this global recognition. Qatar Airways also won a raft of other major awards at the ceremony, including ‘World’s Best Business Class,’ ‘World’s Best First Class Airline Lounge’ and ‘Best Airline in the Middle East.’

For more information about Qatar Airways, visit their website through this link.

CLIR Releases Prototype for the Digital Library of the Middle East