Japanese and Korean cuisines are one of the most popular cuisines in Asia. The two, along with Chinese cuisine, usually share menus at restaurants around the world due to their similarities. Therefore it’s hard to distinguish Japanese restaurants from Korean especially in Qatar and the region where most restaurants offer East Asian cuisine in one shared menu.

Tempura consists of seafood, vegetables, mushrooms, or meat coated with batter and deep fried. The resulting food has a light, but crispy texture, that may be seasoned with salt or dipped in a light sauce before eating. Tempura was introduced to Japan by the Portuguese in the 16th century, and has become one of Japan’s most famous dishes internationally. 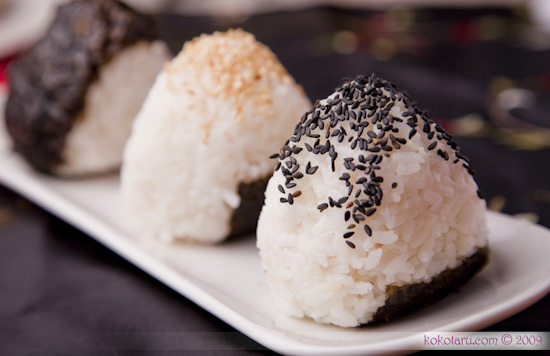 Rice balls, or Onigiri, are made of cooked rice and are usually wrapped in nori seaweed. They are usually lightly seasoned with salt and often contain a filling such as umeboshi (pickled Japanese plum), okaka (dried bonito shavings and konbu), or salmon. Rice balls are a popular and inexpensive portable snack available at convenience stores, but are also commonly served at general restaurants and izakaya.

For over 2,000 years, rice has been the most important food in Japanese cuisine. Despite the recent changes in eating patterns and decreasing rice consumption, rice remains one of the most important food in Japan today. Served with most Japanese meals is a bowl of plain cooked rice. For breakfast, it is sometimes mixed with a raw egg and soya sauce (tamago kake gohan) or enjoyed with natto or other toppings.

Fried rice, or chahan, is a dish that was originally introduced from China. There are an infinite variety of ingredients that can be added to fried rice. Some common ones are peas, egg, green onions (negi), carrots and pork. Chahan is a suitable dish for using left over rice.

Hate it or love it, Sushi is the most popular seafood dish in Asia – originally belonging to the Japanese cuisine. Sushi may refer to any dish that contains sushi rice, cooked white rice flavored with seasoned rice vinegar. There are various kinds of sushi dishes, such as nigirizushi (hand formed sushi), makizushi (rolled sushi), and chirashi (sushi rice topped with raw fish). Sushi is the most famous Japanese dish outside of Japan, and one of the most popular dishes among the Japanese themselves.

Sashimi is raw seafood. A large number of fish can be enjoyed raw if they are fresh and prepared correctly. Most types of sashimi are enjoyed with soy sauce and wasabi.

Meat, seafood and vegetables are prepared on a large iron griddle (teppan) around which the diners are seated. The chef artfully prepares the dishes in front of his customers.

Like Japanese cuisine, Korean cuisine offers a great variety of dishes, consisting of rice, seafood, noodles and other dishes.

Dating to the Shilla Dynasty (approximately 2,000 years ago), kimchi is the beloved spicy sidekick at every Korean table. It’s made by salting and preserving fermented cabbage in a bed of pepper, garlic, ginger and scallion. A Korean traditional meal is not complete without kimchi, a mixture of various pickled vegetables such as Chinese cabbage, radish, green onion and cucumber. Certain types of kimchi are made spicy with the addition of red chili pepper powder, while others are prepared without red chili peppers or are soaked in a tasty liquid. However, garlic is always used in kimchi to add to its flavor.

The process of making Sushi-like gimbap resembles the Italian glasswork technique of millefiori, and indeed, the finished gimbap often looks too pretty too eat. Sautéed vegetables, ground beef, sweet pickled radish, and rice, rolled and tightly wrapped in a sheet of laver seaweed (gim), and then sliced into bite-sized circles.

This classic Korean noodle dish combines translucent sweet potato noodles with lots of stir-fried vegetables and a sweet-savory sauce. To make it, sauté mushrooms, carrots, onion, garlic, and spinach, then throw in the cooked noodles with some soy sauce mixed with brown sugar. Once it’s all evenly heated, top with scallions and toasted sesame seeds and serve with a Korean barbecue meal, or take it to work for a light vegetarian lunch.

Posted On 30 September 2020
Food and Restaurants