The first-ever ‘VIRTU-REAL’ and 34th episode of the weekly #bigbmeetup was hosted at the International School of London (ISL) Qatar on 6 February, carrying the theme, ‘Championing Arab Sportswomen’ to mark this year’s Qatar National Sports Day celebrations.

#BigBMeetUp founder Bosco Menezes said he is over the moon with the success of the first ‘VIRTU-REAL’ meetup.

The International School of London Qatar was a great host. To hold this programme at their spanking new pool made perfect sense since we were bringing in Qatar National Sports Day and we have a two-time Olympic swimmer from the Qatari National Team in our panel.

ISL Qatar Head of School Dr Sergio Pawel and Youth Advocate of Education Above All Noor Al Qaedi also delivered short speeches on how sports and education work side-by-side to develop the youth of today. Ahmed Al Shaharani, an endurance athlete and the moderator of the show, was surrounded by four women who are the very definition of female empowerment in the region.

Reem Al Muftah, a fitness instructor and wellness advocate, started the show by sharing how she fell in love with sports and the idea of taking care of her body. She also described how her devotion to advocating for well-being was further ignited when she entered motherhood.

Nada Wafa, a two-time Olympian and a member of the Qatar National Swimming Team, then shared her story about what got her into swimming. Her parents – particularly her father – triggered her passion for water sports. 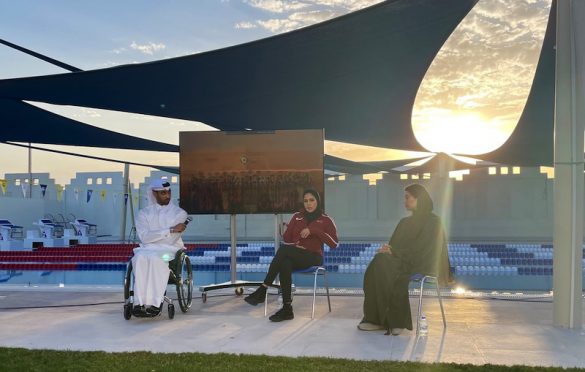 Mariam Farid, a huddler and a Qatar National Team athlete described how the intensity of the games and the exciting life of a sportswoman drove her competitive spirit to keep her achieving in her career.

Dr Jowhara Al Qahtani, surgeon and founder of Run the World Qatar, said that running became her escape from her very demanding job as a surgeon.

All four women found two common things about how they got into sports and wellness: the opportunities that their respective schools presented them and the support of their fathers. These two simple factors helped them kick-off their journeys.

Dr Pawel also shared the other side of the story: the father’s perspective. At a noticeably young age, he said that his two daughters were intrigued by fencing and eventually started to compete in international events. He shared that it was a privilege and a pleasure to see his children’s characters form and develop and be empowered by sports. Dr Pawel added that it’s very easy to support athletes – you just have to say YES.

With women continuing to inspire the world with their adventures in sports and wellness and fathers like Dr Pawel, it is inevitable for future generations to think of strong and determined sportswomen when the word ‘athlete’ is mentioned.

ISL Qatar has an outstanding reputation for high academic standards, prestigious International Baccalaureate (IB) programmes and an impressive record of admission to the best universities worldwide.

Check out Marhaba’s FREE e-Guides to learn more about the education sector and the various other industries in Qatar.

‘Asean’ Cultural Week to Take Place at Katara in November 2014

Jules of the Kitchen Recipe: Fig and Blackberry Frangipane Tart

From Vision to Reality: HH Sheikha Moza’s Unique Insight on How Qatar Foundation Came to Be