Hamad International Airport (HIA) witnessed remarkable achievements in 2018, with the five-star airport successfully completing the first phase of its Smart Airport Program, launching Phase 2 of its expansion plan, and receiving numerous international awards, continually shaping the airport as a leader in the global aviation industry.

Experiencing a steady year-on-year passenger growth and with 8.1 million passengers passing through the terminal just in the last quarter of 2018, HIA projects a 20% increase in passenger traffic this year as it continues to deliver on its vision as the ‘airport of the future’.

Aside from increased passenger traffic, HIA also facilitated 57,831 aircraft movements as well as handled 570,337 tonnes of cargo, a 14.3% and 8.4% increase respectively, compared to the fourth quarter of 2017.

HIA ranked as the second best airport in the world for On-Time Performance (OTP) in the OAG Punctuality League report. OAG is the leading global provider of digital flight information.

Qatar’s state-of-the-art airport ranked second in the major airports category (from 20 to 30 million departing seats per annum) with 85.41% of its flights operating on time. The Punctuality League is based on 58 million flight records using full-year data from 2017, to create a ranking of the best OTP for the world’s largest airlines and airports.  HIA joined the top 20 airports in the ‘Major Airports’ category within the Punctuality League this year, recognised as the world’s definitive measurement of on-time performance.

According to HIA Chief Operating Officer Engineer Badr Mohammed Al Meer, 2018 has been a highly rewarding and successful year for HIA. He said that 2019 will be a continuation of the successes and key developments for the airport, as Phase 2 of the multi-storey expansion plan begins.

Our continued investments in infrastructure, cutting-edge technology, and front-line processing solutions will continue to shape HIA as a leading aviation-hub and set new standards and records across the industry.’

Amidst the projected increase in passenger traffic this year, HIA remains ahead of the curve and accomplished an industry-leading transfer security screening which has significantly shortened queuing times at security points. At least 95% of the airport’s transfer passengers queue for under five minutes.

Phase 2 of the HIA expansion plan will enable HIA to accommodate over 53 million passengers annually by 2022. The planned construction of the Airport City will also provide significant opportunities for future investors. The new cargo terminal will increase the HIA capacity to 3 million tonnes per year.

Development in infrastructure plays a key role in Qatar’s preparations for the 2022 FIFA World Cup, complementing the expected spike in tourists and visitor arrivals. 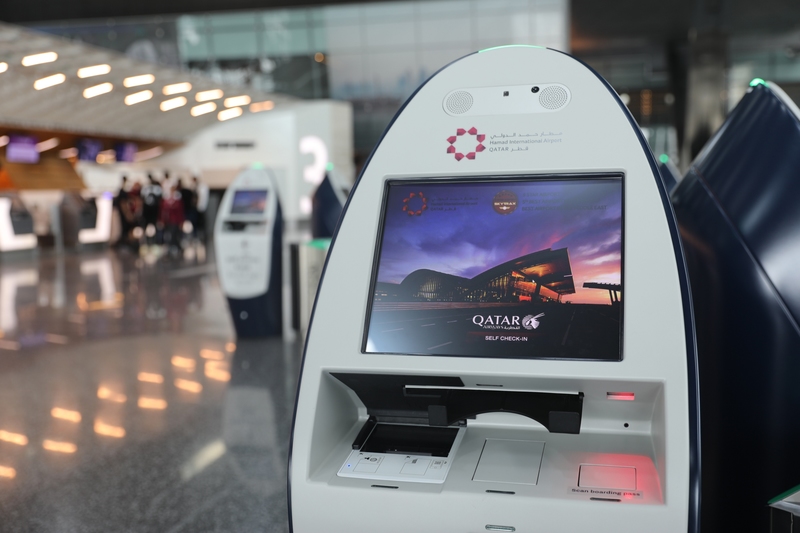 HIA announced the successful completion of the first major phase of its Smart Airport Program in 2018, which will enable the hub to process more than 25% of its passengers using self-service check-in and bag-drop facilities. The airport, in partnership with SITA and CCM, commissioned 62 next-generation self-service check-in kiosks and 12 self-service bag drops with future biometric technology capabilities.

The kiosks are spread across the departures check-in hall and enable passengers to check-in, print boarding passes, tag their bags and drop them at the bag drop before proceeding to border control. A mobile Automated Visa Document Check, the first of its kind in any major airport worldwide, has also been put in place to enable ground services agents to check a passenger’s visa documentation before continuing their journey.

HIA is currently a candidate for the Best Airport in the World Award by Skytrax 2019. Passengers who have experienced HIA’s award-winning services and facilities can visit Skytrax World Airport Survey and vote. Voting results will be announced in March 2019.