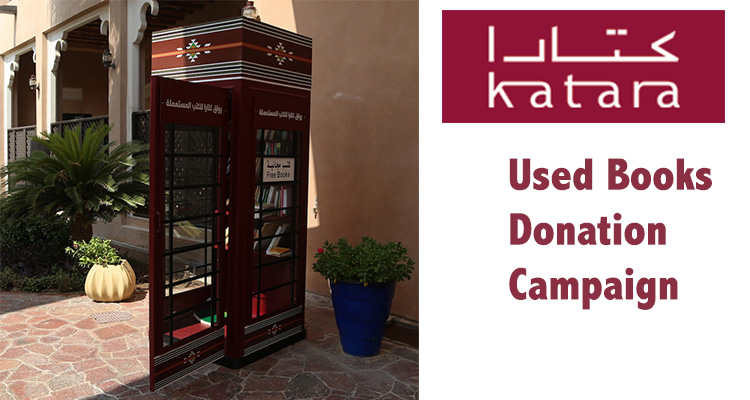 Visitors to Katara Cultural Village can now pick up any used books in English and Arabic for free, at any one of the several purpose-made cabinets set up around the premises of the village. Katara’s Used Books Donation Campaign, now in its second year, has evoked a tremendous response from the public.

Katara started collecting used books from potential donors last month, distributing them to the public for free. The social media campaign launched simultaneously by Katara to promote the project has been well-received, according to Khalid Al Sayed, in charge of the project.

He said that the objective of the project was to promote a culture of reading among the public and help people dispense of their unwanted books.

With limited space in houses and accommodations, many people here would be facing problems in keeping used books for long. Eventually, they would be forced to throw them away. The Katara project has provided an effective way to dispose of such unwanted books.’

He said that the project is in line with the Qatari culture of ‘helping others’. At least 20,000 books were distributed last year under the project, according to Al Sayed. Seven especially-made cabinets across the Katara premises were set up to showcase and distribute the books. It also has a hotline number – 3131 8620 – for the public to call if anybody wants to donate books.

Katara is accepting books in English and Arabic on all topics. Visitors to Katara can open the cabinets and take the books they wish to take.

The maroon-coloured cabinets are designed following the traditional Qatari look. The top of cabinets are illustrated with the design of a Qatari tent. They are permanent facilities that are open to the public round-the-clock.’

We have been receiving books from donors, English and Arabic novels and informative books on a wide range of topics. We also see a large number of takers for the books, and we are inviting more people to participate in the campaign.’

Al Sayed said they plan to make the campaign permanent, a continuing cultural project of Katara.

For enquiries on book donations, call the campain hotline number at 3131 8620. Visit katara.net for updates and more information about the village.