The first edition of the Katara International Hunting and Falcons Exhibition S’hail 2017 was inaugurated at the Cultural Village Foundation – Katara this Wednesday, attended by falconry enthusiasts and visitors.

The first of its kind show is participated by local and international companies specialising in falconry and hunting-related tools and equipment. Participants from Qatar and overseas offer a diverse range of products and services related to falcons and falconry – including hunting vehicles, tools and equipment, and even care-related supplies.

As many as 54 participants joined from Qatar; 15 from Kuwait; five from Spain; four from Pakistan; three from Germany; and one each from the US, the UK, France, South Africa, Azerbaijan and Lebanon.

The exhibition also features more than 400 falcons from three local farms and nine other breeding farms from Spain, Germany, France, and Russia. Several falcon veterinary clinics, including the Souq Waqif Falcon Hospital, will conduct the necessary tests for the falcons purchased from the exhibition.

The exhibition also welcomed international hunting-related materials like camping gear, hunting arms and tools, and safaris on offer at discounted rates. Cultural stands from Morocco, Georgia, Kazakhstan, Kyrgyzstan, and Turkey, are also on display. These countries will introduce visitors to hunting and falconry heritage through the exhibition.

Several vintage hunting vehicles are also on show, giving the audience a picture of how it’s like to hunt in the past.

An auction, where falcons are offered for sale, is one of the main attractions of the exhibition during the opening. A Kuwaiti bidder purchased a falcon for QAR 210,000.

VIP Visit
Australian Ambassador to Qatar Dr Axel Wabenhorst was one of the special guests during the opening of the event. He said he was remarkably impressed by the display, adding that it was an amazing exhibition.

I haven’t seen an exhibition like this before. This is truly amazing. There are, first of all, a lot of falcons but different species of falcons. And it’s falcons all around – the camping equipment, the car accessories, the tools for hunting, the weaponry – you can tell that it’s a very popular activity.’

MoI Head of Information Security Department Hadi Mohammed Al-Hajri said the event became an opportunity for them to introduce Metrash2. This new service eases the application and renewal of documents for citizens and expatriates alike.

Cultural Tent
A traditional tent from Kyrgyzstan also draws the attention of exhibition visitors. Called the ‘yurt’ – it was a traditional tent of the Kyrgyz people – portable, round and covered with skins or felt, and used as a dwelling in central Asia for over 3,000 years. The colourful and cozy tent also featured Kyrgyz people dressed in their traditional attire offering sweets to visitors in their true style and tradition.

That is the reason why we decided to bring and showcase our traditional nomadic house to Qatar, to show the people here that we too, share the same culture in central Asia.

A big number of Qataris travel to Kyrgyzstan, according to the ambassador. By displaying this traditional ‘house’, he was hoping to get more Qatari people visit their country and share their culture. 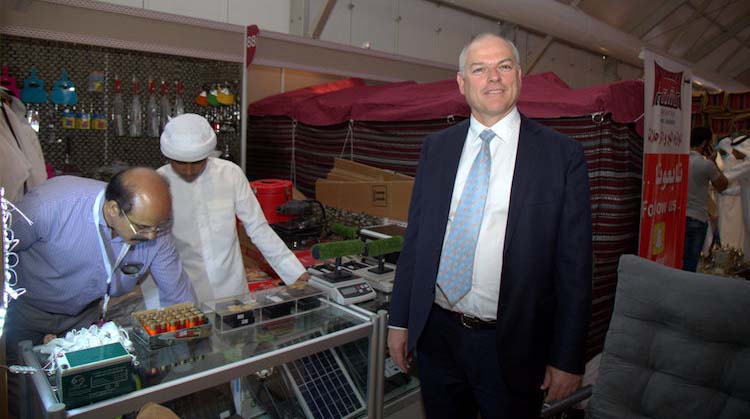 The Katara International Hunting and Falcons Exhibition will run until 24 September. For details, you can visit the Katara Cultural Village website at katara.net.