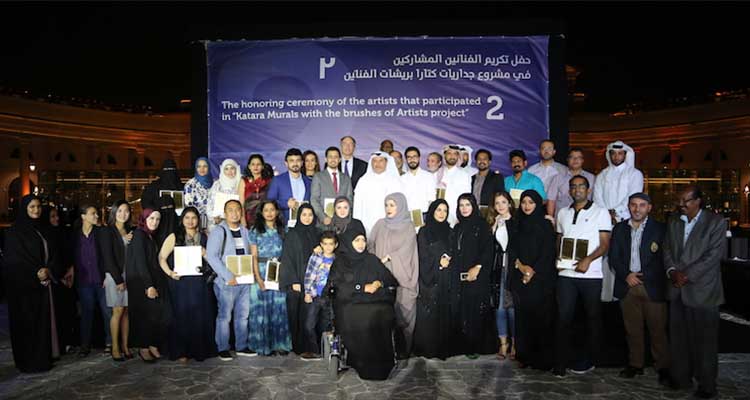 The Cultural Village Foundation-Katara honoured the artists and supervisors who participated in the second edition of ‘Katara Murals with the Brushes of Artists’ project, at a grand event recently at Katara’s Wisdom Square. The ceremony was held in the presence of Katara General Manager, Dr Khalid bin Ibrahim Al-Sulaiti.

Throughout the project, artists were asked to paint and script a meaningful form of art inspired by Qatar’s legacy and Katara’s identity. Innovative artists used varied artistic techniques to overcome the rainy season, painting spectacular murals on Katara’s walls. Regional, local and international artists participated in the second edition of the event, which lasted for almost a month, from 5 – 28 February.

The second edition was under the supervision of the Public Relations and Communications Manager of the Cultural Village Foundation-Katara and Project Manager, Malika Al-Sherim. The project attracted 51 artist participants from 17 nations, with diverse art backgrounds. Amongst the artists who participated were HE Ambassador of the Republic of Austria to Qatar, Willy Kempel and Qatari artists Mariam Ahmad Al-Mulla, Ahmad Nooh Al-Zayed, Eman Abdulah Al-Haidos, Haifa Al-Sada, Fatima Mohamed Al-Naeimi and Fahad Al-Maadad.

The ceremony kicked off with a short documentary that portrayed images of the various phases that the artists went through to complete the murals.

Dr Al-Sulaiti, in his speech after the film screening, emphasised the importance of arts and culture as a way to build communication bridges between people from all walks of life.

The first edition of the murals project saw participation from various nationalities, and here we are on the same path. These artists came from diverse art schools and they translated their vision of Katara and Qatar through their completed murals, spreading the message that art is a common language between people from different civilisations.’

Dr Al-Sulaiti also extended his appreciation to all artists who participated in the project. The artists were awarded with souvenirs – elegant minimised versions of their painted murals – and booklets of the event containing information about each painter and their artwork.

For more information on the various events ongoing at the Katara Cultural Village, visit katara.net.