The final round of the 2014 eni FIM Superbike World Champion takes place this weekend from Friday 31 October to Sunday 2 November 2014 at the Losail International Circuit in Qatar.

For the first time in WSBK history, the event will be held under floodlights thanks to the impressive lighting system that powers the entire venue, allowing riders to race under conditions that are similar to daylight. The Qatari circuit makes its return to the WSBK calendar after a four years absence to host the series for the sixth time as Losail International Circuit hosted this championship from 2005 to 2009. Nasser bin Khalifa Al Attiyah, QMMF President and LIC General Manager. said:

I am very happy to have the World Superbike Championship back to Losail. We already enjoyed this championship in the past and I am pretty sure that with the new format to have it under the floodlights of Losail, it will give more value to this championship.’

In the Qatar round, there will be only two categories, Superbike and Supersport. As the title in the Supersport category is already secured by the Dutch rider Michael Van Der Mark (Pata Honda team) at Jerez, all the tension will be focused in the superbike category, as the title is not decided yet.

This years’ championship is the closest championship finishes in the Superbike history. The two front leaders, Tom Sykes and Sylvain Guintoli head the final season weekend separated by only 12 points, so both of them have chances to clinch the title.

The Kawasaki Racing Team rider, Sykes, is the SBK defending champion and the runner up in 2012 season whereas the French rider Guintoli of the Aprilia Racing Team  finished third in 2013 season. Both riders have previously raced at Losail with Guintoli being the more experienced of the two at this track, having raced there five times before, including one race at night in 2008 in the MotoGP class where he was 15th at the flag. 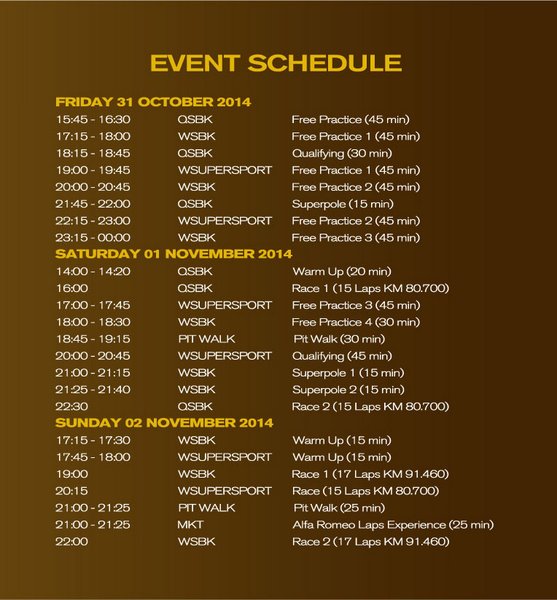 For the Australia’s four-time and defending Qatari Superbike Champion, Alex Cudlin, it will be a busy weekend as a part from riding in the QSBK championship, he will also  join the WSBK championship, riding for the Pedercini Kawasaki team. Cudlin said:

I’m extremely happy to be making my World Superbike debut in two weeks. It really is a dream come true to race in World Superbike Championship. I have to sincerely thank not only Pedercini Racing Team but also my QMMF team, because without them giving me permission to race both  Championships it would just still be a dream. I will also be racing under number 95, In respect to my current QMMF Racing Team. 95 is the national number of the Qatar Federation, so I will use it proudly.’

For the spectators, the grandstand ticket is free for three days and open to the public. The VIP ticket for two days is QR300. Tickets are available until Thursday 30 October 2014 at QMMF offices in Salwa road and after at Losail International Circuit during the event.

Porsche Records More Deliveries in the First Half of 2018

Posted On 10 February 2019
Motoring And Transportation

50,000 Expatriates Benefit from Qatar’s ’Our Eid is One’ Initiative

Milaha Reports QAR300 Million Net Profit for First Half of 2020