Qatar is home to a wide variety of cuisines – Indian, Chinese, Thai, Lebanese, Turkish, Italian, French, American – you name it. Both locals and expatriates have plenty of choices! With all of these options, the Qatari cuisine has been overshadowed although its available in local restaurants across the country.

Qatari cuisine shares many traditional foods of the Middle East and North African (MENA) region, especially with the Gulf region. Their food consists of meat, grain, and dairy as well as vegetables with many stew-like and rice dishes often cooked in a single pot. Traditional dishes include harees, mathrooba, margooga and machbous as well as sweet dishes such as balaleet, luqaimat and esh asaraya.

Common in the Middle East, harees or harissa is a popular porridge-like dish of boiled, cracked, or coarsely-ground wheat, mixed with meat. The wheat is soaked overnight, then simmered in water along with meat and butter. Any remaining liquid is strained and the mixture is beaten and seasoned. Harees may be garnished with cinnamon, sugar, clarified butter and cardamom pods (Hill or Cardamom) as well as parsley at times.

Mathrooba or Madrooba is another popular porridge-like Qatari dish, which can be easily found across Qatar especially at Souq Waqif. It’s made with fish or chicken in a creamy, buttery porridge. It’s often eaten as a treat to break the fast of Ramadan.

Another Qatari dish common in the Middle East is the Margooga, which, because of its ingredients, is a healthy and wholesome food. It’s a stew of vegetables, meat and soaked Arabic bread. It contains dietary fiber, which is in wheat as well as a large amount of vitamins in added vegetables.

Machbous is not exclusively Qatari as it is a common Middle Eastern dish. This rice-based dish consists of spices, meats and nuts. Machbous is served with pulled chicken, potatoes and hardboiled eggs. This rich combination of Eastern spices, basmati rice, nuts, raisons and either mutton, chicken or hamour fish is a staple meal in Qatar, served in a large communal dish. Machbous is usually referred to as kabsa as they are two similar dishes. 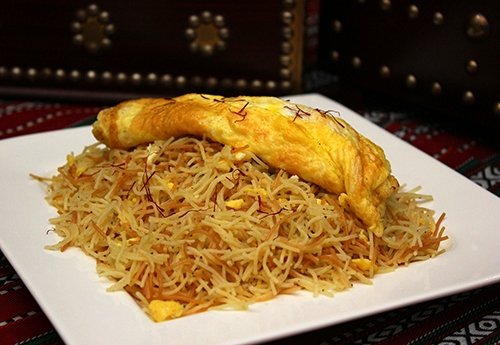 Balaleet is a traditional sweet and savory Middle Eastern breakfast as well as dessert. It’s sweet pasta fried and topped with a fried eggs.

Known throughout the Arab world, luqaimat are small sweet dumplings made of butter, milk, sugar, flour, saffron and cardamom, deep fried and then drizzled with sugar syrup. They are usually served with tea and a favourite during the holy month of Ramadan.

Esh asaraya is traditional and popular Arabic dessert, which is described as sweet bread with cream. Similar to cheesecakes, Esh asaraya is made of made of toasted bread, sugar syrup, rose water, orange water, caramel, cream and nuts.

Other popular Qatari dishes include mandi, mansaf, kabsa and biryani. However, these dishes are not originally Qatari. They are common Middle Eastern dishes but in variations. In addition, coffee and tea are important to the daily lives of Qataris. Similar to the well-known Arabic coffee, Qahwa helw, also known as ‘sweet coffee’ Qatari coffee is a bright orange mixture with cardamom, saffron, and sugar. It can also be served with milk.

Marhaba Picks: Qatari restaurants to try in Doha (in no particular order):