It was with great delight that we were invited to try the new menu at Isla Mexican Kitchen at The Pearl-Qatar. The buoyant mood was set before we even left the house, due to 11 heroic Mexican men in Russia securing a win over Germany, in a day that will surely go down in footballing history.

The ebullient mood continued when we reached the restaurant, with a genuinely warm and cheerful greeting from the team. We had noticed the wonderful outdoor seating area as we approached, but alas, the humid weather prevented us from dallying outside for too long and so we hastened in to the invitingly cool interior.

Isla Mexican Kitchen is the brainchild of renowned chef Richard Sandoval, who has been called ‘the father of modern Mexican cooking’. For residents of a certain vintage, the restaurant sits on the site of Pampano, his former venture at The Pearl-Qatar.

The décor is tasteful and soothing, and we were directed to a booth, which would amply sit four. We were then introduced to Divine, the restaurant manager, a most affable and knowledgeable young chap from Cameroon, who took a good chunk of his time to go through the menu with us. And just as well he did, as this is not your standard Tex-Mex affair!

Divine explained that the menu took eight months to create, with input from their Mexican chef. They continue to research and tweak, and have received an abundance of positive comments about the authenticity of the menu. Much of the produce is locally sourced, and as well as the traditional ‘hard copy’ menu, diners can also peruse the options using an iPad. The menu has something for everyone – vegetarians and vegans are more than amply catered for, and many of the dishes use corn tortillas, should like me, you need to avoid wheat gluten. There is also a section for children and the restaurant will happily cater for birthday parties and so on. Our server Ivy was a godsend, patiently answering all our questions, and indeed made some excellent recommendations. 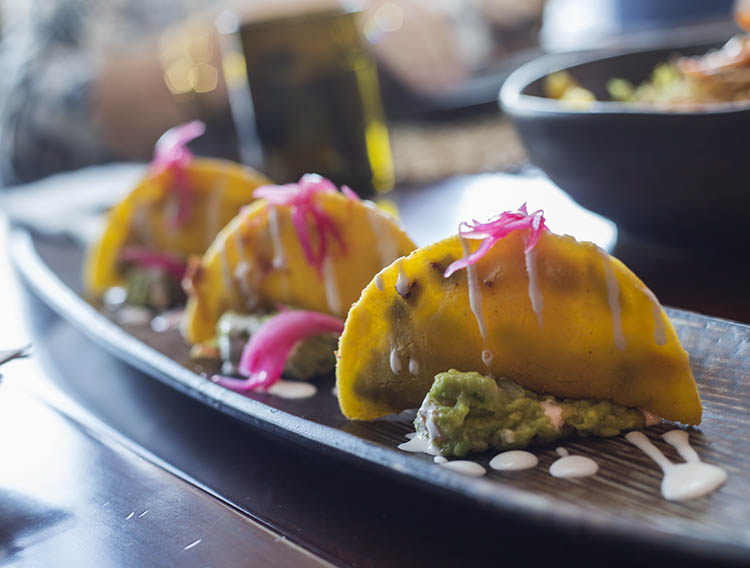 Mi amigo and I finally managed to put in our order and while waiting we were brought nachos and salsas to try. Really fresh and delicious, we had both red and green salsas, and it was a change from the chunky style salsa that one normally gets – but it still presents the ‘just one more’ problem! Amigo could not decide between which soup to try, so obviously decided to have two, the sweet corn and the crema de mariscos, a seafood bisque. They were rich without being sickly, and so full of flavour. Meanwhile, I opted for the vegies empanadas, made with corn dough and full of cheese and vegetables. They were superbly accompanied with guacamole and sharp pickles.

One would have thought that Two Soups would have been full, but he decided to continue the theme and try two main dishes as well. As a Tex-Mex aficionado, he opted for the beef fajitas, served with all the usual fixings – tortillas, Mexican rice and charro beans – and which were served in a rather adult, almost genteel manner. Main course two, taco de deshebrada, involved three hard corn taco shells with shredded beef, while I tried the adobo shrimp version, deliciously topped with pineapple, coriander and onion.

By the end, Two Soups and Mains declared himself sufficiently replete and his poncho was straining at the seams. I was similarly sated and in lieu of dessert decided to finish the mango chamoy I had ordered to drink with my meal. Chamoy is widely used in Mexican food as a dipping sauce or condiment and is made from pickled fruit. Divine had recommended the drink and challenged me to try and identify the mystery ingredients used in their chamoy. Well, Divine, I couldn’t, so I guess we’ll have to come back and try again!

Isla Mexican Kitchen offers all-you-can-eat tacos every Tuesday for only QAR 99. You can also watch FIFA World Cup live on their screens.

Top Reasons to Choose Westin Doha for a Family Staycation

The Wood of the Gods