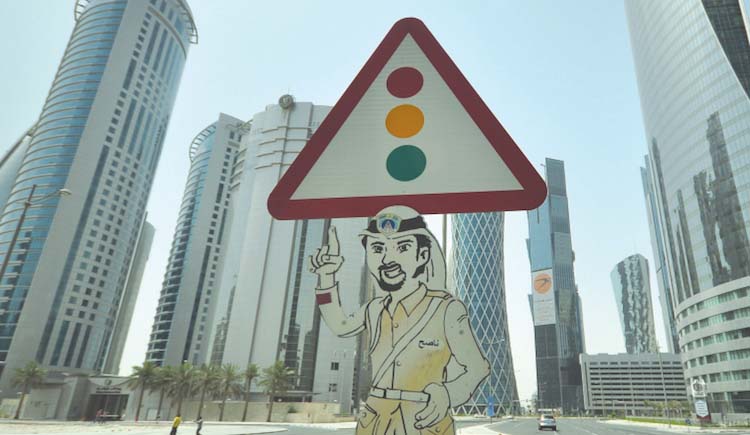 Notable Decrease in Traffic Accidents in 2019, According to Traffic Statistics

Brigadier Ibrahim Saad Al Sulaiti, Head of the Statistical Analysis Office at the Ministry of Interior (MOI), stressed the importance of presenting statistical information on the traffic situation annually as it contributes to reducing the traffic accidents to the lowest levels.

Statistics also showed a decrease in the total number of traffic accidents by 2.8% compared to 2018, as most of the traffic accidents accounting for 97% recorded in 2019 were minor accidents without injuries, while accidents of severe injuries accounted for 0.3% only.

Brigadier Ibrahim Saad Al Sulaiti compared the traffic accident indicators for every 100,000 people registered in Qatar with their global counterparts. He pointed out that all of them were lower than global averages.

The accident death rate for every 100,000 people in Qatar recorded 4.4 deaths, which is less than the global average of 18.2 deaths by 5.8%. It is also less than the rate recorded in the high income countries by 47%.

He said that all road traffic death rates recorded in the State of Qatar in 2019 indicate a significant decrease from global indicators and ratios. He lauded the efforts of traffic safety partners from various sides, including the Traffic Department, the National Traffic Safety Committee, ambulance service, the Public Works Authority, the Ministry of Municipality and Environment and other competent institutions and agencies in the state.

The head of the Statistical Analysis Office added that there was a decrease in the number of traffic accident deaths in the last ten years by (31.3%), as well as a decrease in the traffic death rate per 100,000 people during the same period by 60.7%. This confirms that the strategies developed to reduce deaths have achieved the desired goals.

He noted that the drivers ’deaths accounted for 45.5% with 70 cases, while the number of passenger deaths was 40 cases by 26%, and pedestrian deaths amounted (44) cases at a rate of (28.6%) of the total traffic deaths.

The number of Qataris who died in traffic accidents reached 42 persons, at a rate of 27.3% of the total traffic deaths of 154 deaths. It decreased by 6.7% compared to 2018. The number of the deceased from the Arab nationalities recorded 31 cases, by 20.1%, while the remaining 81 deaths that accounted 52.6% were foreign expatriates.

For his part, Major General Mohamed Saad Al Kharji thanked the officers and all personnel at the General Directorate of Traffic for their great efforts, calling for more effort and maintaining the rate reached.

He added that the Public Works Authority implements pedestrian crossing places, tunnels or bridges, which will work to reduce pedestrian accidents, in addition to fencing on the roads that compel pedestrians to cross from designated places only. He said that the percentage of pedestrian deaths, which was recorded 28.6% of the total traffic accident deaths in 2019, would reach 0% in the future.