Qatar Airways is proud to participate in the Qatar-Germany Business and Investment Forum, the ninth edition of the premier economic event, which took place in Berlin recently, under the patronage of HH The Emir, Sheikh Tamim bin Hamad Al Thani. The event was also graced by the Chancellor of Germany Angela Merkel, and the Deputy to the President of Germany and Governing Mayor of Berlin Michael Müller.

Qatar Airways hosted the official gala dinner of the forum, which was attended by dignitaries and government officials.

Qatar Deputy Prime Minister and Minister of Foreign Affairs Sheikh Mohammed bin Abdulrahman Al Thani, said he was delighted to celebrate the partnership between Qatar and Germany, which has now expanded over 60 years, built on mutual trust and a common vision.

Qatar is proud of its long-standing partnership with Germany, and we hope that this forum will serve as a joint catalyst for the growth of our joint businesses and economic cooperation.’

Qatar Airways Group Chief Executive Akbar Al Baker, said that Qatar Airways is proud to be a key driver of trade between Qatar and Germany, as shown by the continued investment into the airline’s long-standing German operations and the recent 20th anniversary milestone of Qatar Airways’ first flight to Munich, their launch destination in the country, which began in June 1998.

In addition to Qatar Airways’ role as a vital trade partner, we were also thrilled of our new role as the Official Airline Partner to German football giant FC Bayern München AG in March. The uniting of our two brands reflects the importance of sports as a means of bringing people together, something which is at the heart of the airline’s own message – Going Places Together.’ 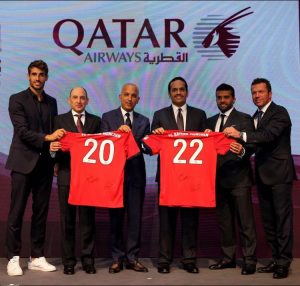 Qatar Airways also presented several videos, showcasing milestones in the country and the growth of sports in Qatar in anticipation of the 2022 FIFA World Cup Qatar™.

The Germany-Qatar Business and investment Forum is set to strengthen the ongoing bilateral relations between Qatar and Germany, and to emphasise the long-term benefits of economic and financial collaborations between the two countries.

Germany is one of Qatar’s largest trading partners, with a volume of trade between the two countries reaching nearly 1.9 billion Euros in recent years. Over the years, Qatar has invested in several key industries in the German market, including the automotive, information technology and banking sector, which has lead to more than of 25 billion Euros worth of Qatari investments in Germany.

Qatar Airways currently operates 35 weekly flights between Doha and Frankfurt, Munich and Berlin. Two daily flights from Frankfurt and Munich, and one daily flight from Berlin. By November, all three routes will be operated by a Boeing B777 aircraft.

For updates and more information about Qatar Airways, visit qatarairways.com.