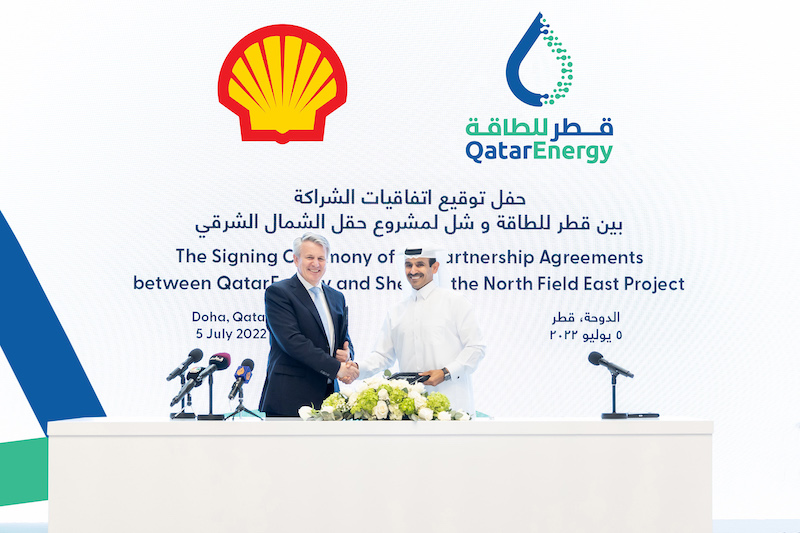 QatarEnergy announced the selection of Shell plc as partner in the North Field East (NFE) expansion project, the single largest project in the history of the LNG industry.

The partnership agreement was signed recently during a ceremony at the QatarEnergy headquarters in Doha by Minister of State for Energy Affairs and QatarEnergy President and CEO HE Saad Sherida Al-Kaabi and Shell CEO Ben van Beurden, in the presence of senior executives from both companies.

Pursuant to the agreement, QatarEnergy and Shell will become partners in a new joint venture (JV) company, in which QatarEnergy will hold 75% interest, while Shell will hold the remaining 25% interest. In turn, the JV will own 25% of the entire NFE project, which includes four mega LNG trains with a combined nameplate LNG capacity of 32 million tonnes per annum (MTPA).

In his remarks during the signing ceremony, HE Saad Sherida Al-Kaabi said they are very pleased to have Shell join them as partner in the mega project.

We have lived up to our commitment, as well as to our global reputation as a reliable and trustworthy energy provider.

Today’s announcement marks the successful conclusion of the selection of our international energy company partners in the North Field East project, through which QatarEnergy and its partners reaffirm their commitment to the energy transition and to the safe and reliable supply of cleaner energy to the world.

HE Minister Al-Kaabi also said that they value their long and fruitful relations and strategic partnership with Shell, not just within the State of Qatar, but in many other locations around the world. He added that as one of the largest players in the LNG business, they have a lot to bring to help meet global energy demand and security.

HE Minister Al-Kaabi thanked the working teams from QatarEnergy and Shell, as well as the management and working teams of Qatargas. He concluded his remarks by saying that they are always indebted to the wise leadership of HH The Amir Sheikh Tamim bin Hamad Al Thani and his continued guidance and support of the energy sector.

Ben van Beurden, meanwhile, said they are honoured that Shell was selected by QatarEnergy as a partner in the NFE project. He said that through their pioneering integration with carbon capture and storage, the landmark project will help provide the world LNG at a lower carbon footprint.

This agreement deepens our strategic partnership with QatarEnergy which includes multiple international partnerships such as the world-class Pearl GTL asset.

Van Beurden also highlighted their commitment to maximise the value of the LNG expansion for the State of Qatar and continue to be a trusted, reliable and long-term partner in the country’s continued progress.

The agreement is the fifth and last in a series of partnership announcements in the US$28.75 billion NFE project, which will raise Qatar’s LNG export capacity from the current 77 MTPA to 110 MTPA.