Qatar’s location in the Arabian Peninsula and its proximity to neighbouring countries and civilisations has helped to build its cultural heritage. In recent times, the State has chosen a conservative policy to preserve its cultural heritage, in keeping with modern developments, but without losing sight of its history. Many of these projects are overseen by the The Cultural and Historial department at Qatar Museums.

There are many heritage sites open to the public, usually with parking nearby. The QMA is working towards making the sites more user‑friendly, constructing toilets and visitor centres, with explanation boards, bins and benches available. Currently only Al Zubarah archaeological site has full facilities.

The Barzan Towers are located outside of Doha in the village of Umm Slal Mohammed, and were built in 1910 by Sheikh Mohammed bin Jassim Al Thani, the village founder. The heritage site is one of the most recently restored.

Barzan means ‘the high place’, and as the towers are 16m high, will explain how they got their name! It is thought that they were used as a watchtower to monitor the movement of ships and as an observatory to monitor the moon. This was crucial for the Arabic calendar, where each month depends on the moon, the best example being the beginning and ending of Ramadan.

Al Jassasiya is one of a dozen rock‑carving sites in Qatar, but is by far the most impressive. This major petroglyph site, northeast of Doha, was discovered in 1974 on low limestone hills known also as jebel.

The 874 carvings consist of rows of cup marks, rosettes, ships, fire pits of pre‑Islamic times, and foot marks. It is believed that the cup marks were used for playing ancient board games, one of which was called mancala, known in Qatar as al haloosa or al huwaila.

It is possible that the earliest carvings may belong to the Neolithic period, however new findings suggest that they are not more than a few hundred years old.

This is Qatar’s only UNESCO World Heritage Site and is approximately 100 km northwest of Doha.

Al Zubarah was the most important pearling and trading town in the Gulf in the 18–19th centuries; the site today though is completely abandoned. Founded in the mid‑18th century, the town developed into a centre of the pearling trade and became the country’s largest and most important settlement. The success of Al Zubarah attracted the attention of other Gulf powers, and after several attacks the town was eventually burnt to the ground in 1811. It never fully recovered and was abandoned by the mid‑20th century.

Al Zubarah Archaeological Site covers an area of 60 hectares with remains of houses, mosques, large fortified buildings and a market.

The Ras Abrouq area is on the west coast, north of Dukhan, and is instantly different in nature due to its unusual landscape of white cliffs sculpted into strange shapes. This formation is known as Hofuf, fine‑grained to pebbly coarse‑grained fluvial sandstones of the Late Miocene to Pliocene eras.

This area of Qatar never experienced permanent erected housing, however one proof of life is the fort at Bir Zekreet, which is also one of the only forts in the southwest. It is thought to have been built between 1809 and 1812. Around the remains of the fort is a settlement of small houses and archaeologists have discovered the remains of a building between the fort and the sea, housing three date‑presses. 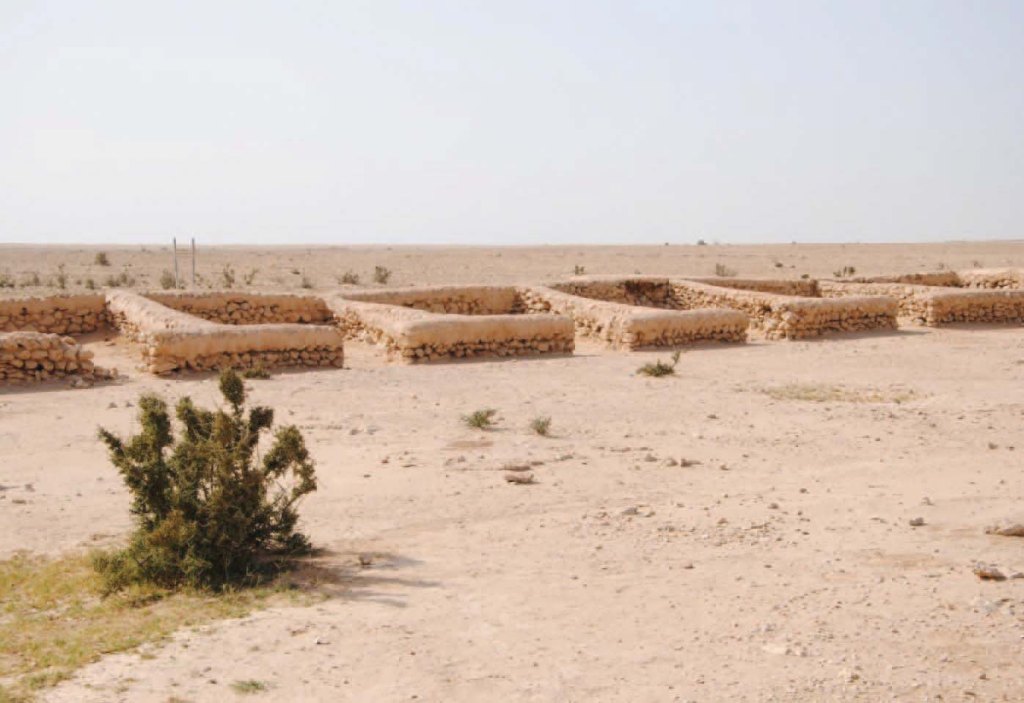 Murwab was a settlement of 250 houses, constructed in groups, with a fort and two mosques. The largest group was built to the north of the palace with 170 houses. Excavations have also revealed tombs scattered around the houses. The Murwab fort is known to be the oldest discovered fort in Qatar. The excavated foundation walls overlaying each other show clearly that it was rebuilt in the same place by reducing its size.

Excavations at this site 40 km north of Doha in the Al Khor area have brought to light several hearths and rectangular structures. Layers of shells have also been found – the shellfish (thaissavigny) lives under rocks and produces a bright red dye in contact with an enzyme and light. The site may have been used during the Bronze Age to produce dye. If true, it is the only documented dye production site in the Arabian Gulf, and the only one outside of the Mediterranean, where it was usually produced.

The island is also known for the mangrove trees, tolerant tropical trees that survive in salty, inter‑tidal, shallow lagoons where other plants rarely grow. There are almost 50 species of mangroves, but in Qatar, there is only one, known as Grey Mangrove. Jazirat bin Ghanam is perfect for birdwatching, as a large number of migratory birds stay in the area during the winter.

Along Al Khor Corniche, 50 km outside of Doha, are three towers, built in 1900. Each tower is cylindrical with a diameter of four metres, made of mud and local stone, and eight metres high. The building’s ceiling was built of danshal wood beams overlaid with basgill (bamboo lain) and mangharour (woven cane mat).

Apparently the towers had two purposes: the surveillance of the town, as the height of them allowed guards to watch both the sea and the land, and to act as a defensive building due to the 60‑centimetre thick wall that provided safety and protection.

On the northwest coast of Qatar is the small traditional but ruined village of Al Jumail. It was originally inhabited by the Al Kubaisi family; nowadays it is a favourite weekend escape for local families, since it represents their heritage, history, the roots and origin of their ancestors.

The village includes the ruins of old, traditional houses and a small mosque whose minaret still remains. This village dates back to the second half of the 19th century and was still inhabited until the beginning of the 20th century.

One of several desert forts dating back to the 18th century. Located on the road between Al Zubara and Madinat Al Shamal, it is one of a few forts that were renovated in the 1980s, and thankfully still resembles the original. The original remains can be seen in the courtyard.

Arrakiyat means ‘well’ in Arabic; it is believed that the fort was built to protect these essential sources of water, supported by the existence of a well in the fort itself and the scattered remains of a village close to the fort. It is typical of all desert forts, with three rectangular towers and one round tower. Around the three sides of the central courtyard are aligned narrow rooms without windows, but with doors that open to the courtyard. The only entrance to the fort is in the southern front wall.

Al Thaqab fort lies about 10 km from Al Zubara. Due to the fragments of pottery and Indian glass bangles scattered around, the fort could possibly date back to the 19th century. However the houses that surround it suggest it may be of an earlier date.

The name thaqab means ‘the water in the bottom of the valley after the rain’. Some people believe that Al Thaqab might mean a small stream of water at the foot of the mountain, hidden completely from the sun and consequently always cool.

Al Thaqab fort is one of the forts that was renovated in the 1980s but unfortunately not authentically and carefully enough. In the proximity of the fort, towards the west, there is a deep well that has been in use since 1911. The fort itself is a typical desert fort with three round corner towers and one rectangular tower. The inside of the fort was used by the villagers to store food and water in case they were besieged. This explains the wells dug in one corner.

Things to keep in mind before visiting the heritage sites