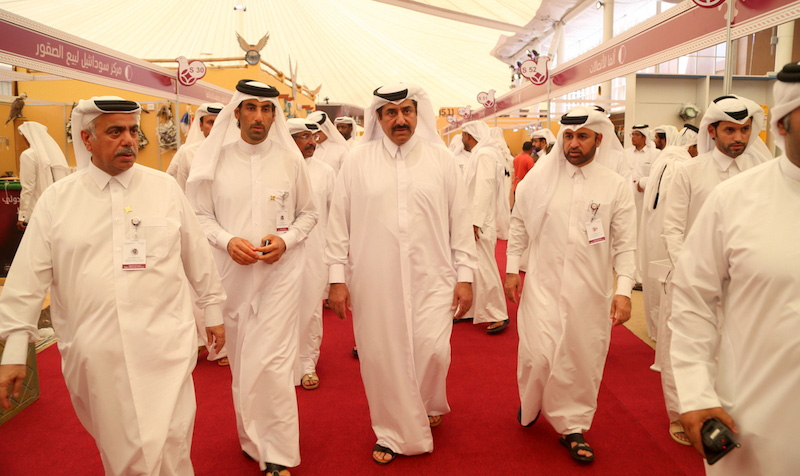 Also in attendance during the inauguration is Katara General Manager Dr Khalid bin Ibrahim Al Sulaiti and other dignitaries and officials of Qatar.

Dr Al Sulaiti guided the Prime Minister on a tour of the exhibition where he examined the different pavilions featuring exhibitors and  participating companies displaying products and accessories related to hunting and falconry. Sheikh Abdallah also gave a brief speech during the falcon auction, where he praised the exhibition and its diverse attractions.

Dr Al Sulaiti said the big turnout at the exhibition opening is a sign that it has indeed become a prominent event in the region. He said that visitors to S’hail this year will realise the development in this edition in terms of its size and the number of participating companies, proof that the exhibition is growing rapidly and succeeding.

Several ambassadors and foreign dignitaries were also present during the opening. They had a tour around the exhibition led by Dr Al Sulaiti.

The Qatar Society of Al Gannas also has a significant presence at the exhibition with their large pavilion where local falconers and hunters gather to discuss issues of hunting and falconry. Its president, Ali Al Mehshadi, praised the exhibition and expressed his happiness over the larger venue and the increased number of participants in this year’s edition, which he said will have a positive impact on the local and international hunting aficionados visiting the S’hail exhibition.

More falcons and more companies are here this year, which makes our mission more effective in supporting and promoting this traditional hobby in Qatar.’

The second edition of S’hail, which received a thumping response during its inaugural year in 2017, has been unveiled with a new design and a large circus tent inside an arena. It is spread over an expanded exhibition area of 10,000 square metres, almost double from 4,500 square metres last year. 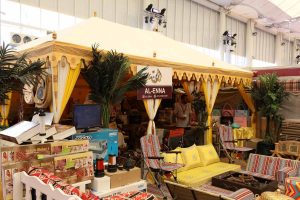 Over 150 manufacturers and companies from 20 countries within and outside the region are participating in S’hail 2018. The first of its kind in Qatar and the region in terms of size, diversity and quality, and dedicated to the needs and requirements of falconers, S’hail 2018  has already drawn thousands of visitors on its opening day.

This year’s edition of S’hail also has more participations from handcraft promoters specialising in hunting and falconry accessories from different countries. Handcraft makers and hunting accessory manufacturers from Pakistan, The Netherlands, Spain and other different countries display some of their finest products including falcon hoods, gloves and leather bags.

Visitors also get the opportunity to meet different hunting arms manufacturers and agencies such as Brownings and Ginochi, displaying the latest brands of hunting weaponry.

The exhibition also provides three daily lectures about falconry and breeding falcons, delivered by experts in the field, in addition to awareness lectures on safe hunting trips and overland safaris. An award of QAR 30,000 will be given to the ‘Best Trade Pavilion’ and ‘falcon hood’ at the exhibition. The everyday auction at S’hail 2018 also features the finest falcons from Qatar and other countries.

Delicious food fare is also on offer, with meats from birds, deer and rabbit procured from fresh hunt and prepared by top chefs.

S’hail is a distinguished event which reflects Qatar’s heritage, both in the regional and in the international arena.

For updates and more information about S’hail 2018, visit katara.net.

Place Vendôme: A Piece of Paris in the Heart of Qatar

BYH 2021 Expo Expected to Attract Deals Worth Over QAR400 Million