Each September sees the start of the new season of Qatar Stars League, bringing drama and action from the domestic football scene.

Qatar Stars League (QSL), under the patronage of Qatar Football Association (QFA), is the top professional league in Qatar. The first official football club in Doha was Al Ahli in 1950. QFA was founded in 1960 and in 1970 became affiliated to FIFA. 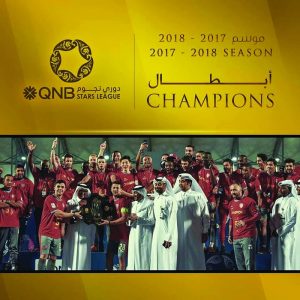 The Qatar Professional Football League Development Committee was set up in 2006 by the QFA to oversee the development of professional football in Qatar while also fulfilling the Asian Football Confederation’s requirements as a professional league. This new permanent committee within the QFA eventually became Qatar Stars League  in 2008. During the 2017–18 season, the QSL was renamed the QNB Stars League due to a three-season sponsorship deal signed with Qatar National Bank (QNB).

Each season, one team from the top tier is relegated into the second division (Qatargas League), with one club being promoted. The footballing season runs from September to May each year. It opens with the Sheikh Jassim Cup and culminates in the finals of the Emir’s Cup,
the Qatar Cup and the QSL Cup.

For those that don’t win the league or season-ending competitions, a chance to claim some silverware is still available, as the season’s top four teams secure a place in the AFC Champions League. Under current Asian Football Confederation rules, the second and third-placed teams automatically qualify for the Champions League.

QFA aims to be among the top three leagues in Asia by 2020. The Association will also identify and develop young Qatari talent and reinforce football professionalism via QNB Stars League.

Many of today’s stars of the future train at Aspire Academy, which provides world‑class training facilities for young people.

QFA undertakes many initiatives to enhance its role within the local community. Everyone is encouraged to participate in the most popular game in the world via sports, social, cultural and educational programmes. QFA works with the Shafallah Center, Al Noor Institute For The Blind, Qatar Foundation, Dhreima, the Supreme Council for Delivery and Legacy, Qatar Airways and other major organisations on a number of social initiatives.

The Rue Brothers at Sabai Thai

In Rugby This Week

Best Gyms and Fitness Centres for Workouts in Doha