The Marvelous Architecture of Qatar

Qatar is home to some of the most beautiful architecture in the region and the world with museums, offices, stadiums and more, designed by some of the world’s most renowned architects such as I M Pei, Jean Nouvel, Zaha Hadid and more.

Prior to the country’s recent development and preparations for the FIFA World Cup Qatar 2022™, there were a few noticeable buildings such as the 40-year-old pyramid-like Sheraton Grand Doha Resort & Convention Hotel, and nearly no skyscrapers. Today, the Doha skyline is one of the most stunning skylines in the world, lined with futuristic skyscrapers and incredible structures.

As you tour around the country, make sure to take in the stunning architectural buildings. 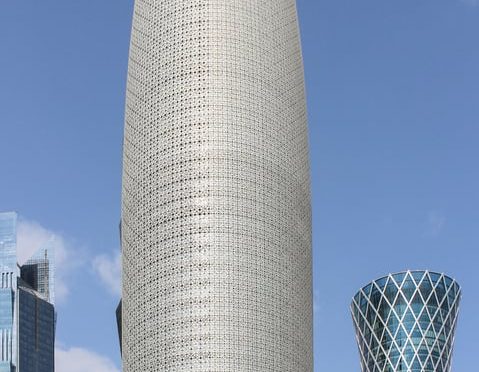 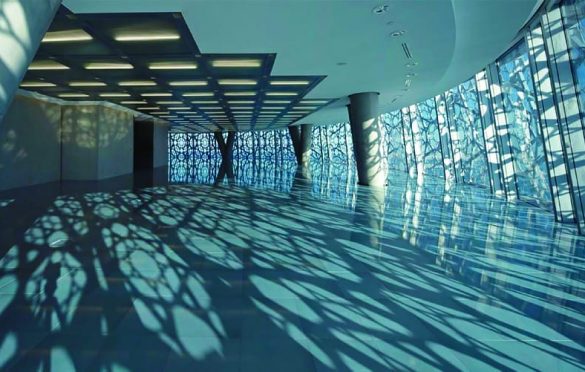 Located on the Doha Corniche, Burj Doha or Doha Tower is one of the most iconic landmarks of Doha, prominently yet subtly adding to the Doha cityscape. It’s one of the highest buildings in the country at about 238.1 m (781 ft) with 46 floors above ground. Designed by French architect Jean Nouvel, the tower was commissioned by Sheikh Saud bin Mohammed Al Thani specifically to address the need for an outstanding example of contemporary architecture for Doha, that also reflected Qatar’s Islamic heritage.

Overlooking the Gulf, the award-winning tower provides floors of offices, a restaurant with panoramic views, and a private residence at the penthouse level. The tower is topped by a full-span dome and a spire, and clad entirely in an intricately patterned stainless steel screen.

The cladding system is a reference to the traditional Islamic mashrabiya, or artistic screen, used for shading or room dividing. The design for the system involved using a single geometric motif at several scales, overlaid at different densities along the façade. The overlays occur in response to the solar conditions: 25% opacity was placed on the north elevation, 40% on the south, and 60% on the east and west. From afar, the screen appears as a uniform density, but the intricacy of the layering and scaling of the screens becomes apparent at a closer viewpoint, lending the building multiple textural experiences.

The overall façade system is estimated to reduce cooling loads by 20%. At night, an integrated lighting system enhances the delicate screen with programmable light shows.

The base of the tower has a 25-m-wide pergola to provide a shaded entry, as well as a lushly planted garden. Landscaping covers 40% of the site, adding to the pedestrian experience. Below, three levels of parking accommodate a total of 870 cars solely for the office tenants.

A large interior atrium houses eight glass lifts; the atrium reaches a height of 112 m, up to level 27, which offers a transfer lobby between low- and high-zones. The transparent lifts offer views of the surrounding city. The structure of the tower is a non-traditional concrete diagrid with canted columns forming an X-shaped framing system. This system creates a unique effect in the office spaces in conjunction with the façade screen. In contrast to more typical office towers, the spatial quality of the interior is one of ever-changing patterns of light and texture, breaking the standard of monotony.

A grand private residence is located within the dome of the tower at 182 m above ground level. The luxury residence has its own private entrance into the building and elevator service, along with private access to the restaurant below. The breathtaking effect of the culmination of the dome structure and screen creates a truly singular space. Included in the residence are a sauna and pool along with typical residential amenities and 360 degree views of the surrounding city. 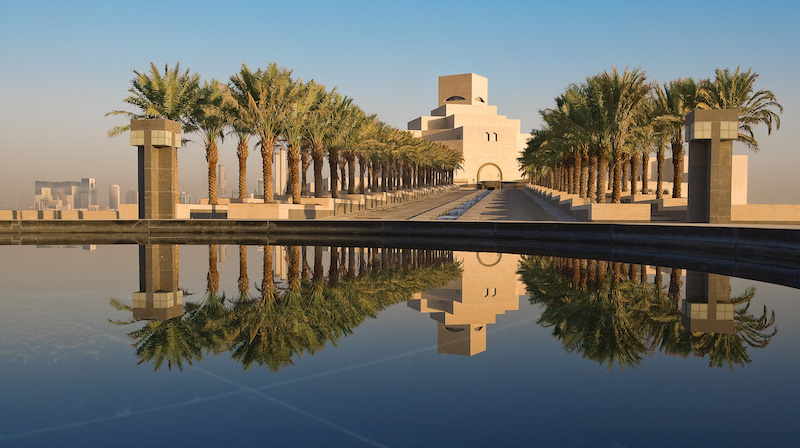 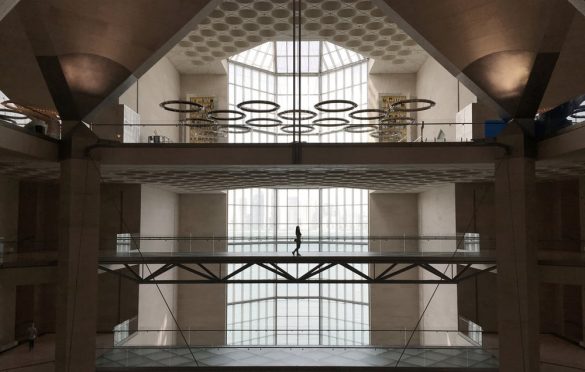 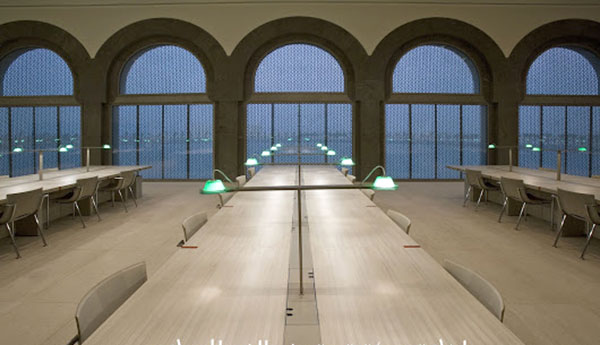 Designed by Pritzker Prize-winning architect I M Pei, MIA became an architectural icon and feature of the Doha skyline when it first opened in 2008. Standing alone on reclaimed land on the Doha Corniche, the building draws much influence from ancient Islamic architecture, notably the Ibn Tulun Mosque in Cairo.

The building is made from limestone, which captures hourly changes in light and shade. The geometric patterns of the Islamic world adorn the inside space, making for a grand interior. The centrepiece of the atrium is a curved double staircase leading up to the first floor. Above it floats an ornate circular metal chandelier echoing the curve of the staircase. An oculus, at the top of the atrium, captures and reflects patterned light within the faceted dome. The five-storey 45-metre tall window on the north side gives spectacular panoramic views across the bay.

A variety of textures and materials, including wood and stone, have created a unique environment for the museum’s stunning collections. With incredible views across the bay, it’s the foundation for Doha’s burgeoning cultural scene.

MIA comprises of main building with an adjacent education wing connected by a large central courtyard. The main building rises five-storeys, topped by a high domed atrium within a central tower.

MIA is also home to Alain Ducasse’s first restaurant in the Middle East. ‘Idam’ means ‘generosity’, and each dish is a celebration of local tastes, spices and ingredients. Philippe Starck’s unique décor creates a sophisticated atmosphere, overlooking Doha’s skyline from the top floor of the museum.

Designed by French architect Jean Nouvel, the National Museum of Qatar officially opened in March 2019, making a dramatic addition to the Doha landscape, with its curved discs, intersections, and cantilevered angles — all inspired by the complex form of the local desert rose, found in Qatar’s arid desert regions.

Designed to be both immersive and experiential, visitors can expect to encounter a rich environment to explore. Organised in three ‘chapters’ — Beginnings, Life in Qatar, and The Modern History of Qatar — each theme is presented across 11 highly individual galleries. The story of Qatar unfolds across the galleries, all employing innovative approaches to storytelling. Each gallery provides a unique perspective across time and connects visitors to lives lived between land and sea. All the senses are triggered through a creative combination of sounds including music and oral histories, visually through film and archival images.

Built on the grounds of the original Qatar National Museum, this unique building embraces the newly restored the Old Palace of Sheikh Abdullah bin Jassim Al Thani — his family home and seat of the government for 25 years — which itself represents the heart of Qatari national identity. This nationally significant building has been carefully restored and conserved, so that it can be enjoyed by visitors and future generations to come.

Spread over 1.5 km, the museum features a 220-seat auditorium, and a rolling programme of events ensures each visit offers a new perspective. For students and researchers, the dedicated research centre and laboratories provide new study opportunities. There are also venues to eat, including a stunning rooftop restaurant, and a newly landscaped park that offers family-friendly interactive learning environments and also celebrates Qatar’s indigenous plants. 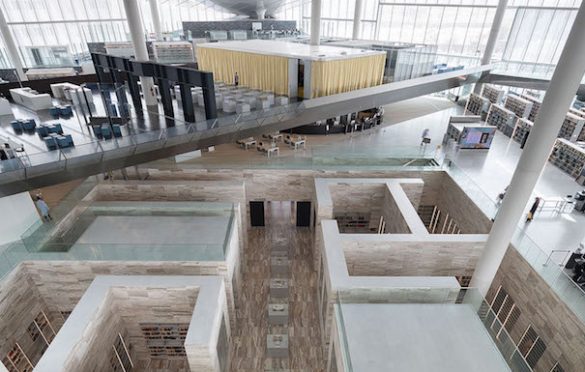 The OMA-designed building, which opened in Education City in 2017, houses several collections of Qatar’s most important texts and manuscripts on Arab-Islamic civilisation.

The library’s angular concrete exterior is unique. Each side of the building lifts at the edges, creating a diamond-shaped exterior profile and an internal space organised around three aisles of books enclosing a central triangular space.

Inside, display shelves stretch out across terraces in every corner of the 138-m-long library, and platforms jut out over the archives sunk into the centre of the structure.

A column-free bridge connects each of the main aisles and doubles as a platform for study spaces, reading rooms, exhibition areas and a multipurpose auditorium that can be defined by a retractable screen.

The shelves are central to the design and function of the library. Each one is made from the same white marble as the floors and infrastructure, and incorporate the lighting, ventilation and even the book return system.

Sunk 6 m deep into the centre of the space are the bookshelves housing the heritage collection, with shelves clad in beige travertine to give the space an ‘excavated’ feel. Directly accessible from the outside, this section can function independently of the main library.

A façade of corrugated glass and a reflective aluminium ceiling are designed to filter and diffuse the bright sunlight to create the optimum light level for reading. Outside, a sunken patio allows light to filter to the basement levels.

Overall the building encompasses 42,000 sq m of space for books and readers, housing Qatar’s National Library, the Public Library, the University Library, and the Heritage Collection. The public library houses over a million books and space for thousands of readers. 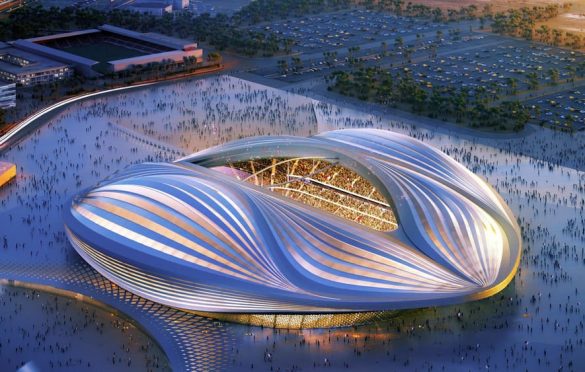 The capacity of the stadium is 40,000, which is expected to reduce in half to 20,000 after the World Cup – the seats will be donated to football development projects overseas.

Its design was inspired by the hulls of the traditional dhow pearl fishing boats, further reflected by the use of timber and traditional materials. The symmetrical roof composed of three shells is the standout feature.

As football fans approach the stadium, they will be greeted by beautiful parkland and the arena’s elegant architecture. A school; wedding hall; cycling, horse riding and running tracks; restaurants; marketplaces; gyms; and parkland are some of the amenities that will accompany
Al Janoub Stadium.

Check out Marhaba’s FREE e-Guides for everything you need to know about Qatar. Or explore our Discover Qatar page for more information about Qatar.

This feature is from the ‘Special Features’ section in Marhaba – Issue 79 (December 2020).