The Es’hail 1 satellite’s entry into service on  18 December last year has enabled Qatar to fulfill its goals of providing independent, high-quality services to broadcasters and other stakeholders in Qatar and the MENA region. But the satellite does more than this for the State. It is the personification of Qatar’s wish to enter into a contemporary realm of self-reliance and sustainability.

‘Es’hailSat marks another major step on the path from a primarily hydrocarbon economy to a modern, balanced economy that is self-sustaining and can grow in the long term,’ says Ali Al Kuwari, CEO of Es’hailSat.

The satellite is jointly owned by Qatari satellite operator Es’hailSat and international company Eutelsat. The Es’hail 1/EUTELSAT 25B satellite was launched on 29 August 2013, and reached its geostationary orbit at 25.5 degrees East on 10 September of the same year. Eutelsat announced the satellite’s entry into commercial service on 29 October, while Es’hailSat’s start of commercial service was on 18 December to coincide with Qatar National Day.

‘This means that now we really are a satellite operator, providing services to customers and looking after their day-to-day needs. It’s the foundation on which we can build our satellite fleet and our company to be a major player, first in the region and then potentially globally,’ explains Al Kuwari.

Es’hail 1/EUTELSAT 25B was designed to serve broadcasters, businesses and public agencies in the Middle East, North Africa and Central Asia via capacity in the Ku and Ka bands. It was designed and manufactured by Space Systems/Loral (SSL) for the two satellite operators. To date, Es’hailSat has seen strong and steady demand for capacity, says Al Kuwari, pointing to HD broadcast as a major driver of this robust uptake.

‘I am very happy to say that Es’hail 1 is already selling well with AI Jazeera taking a significant part of the capacity for HD broadcast of its premium sports and news channels. This is one of the reasons that we’re pushing ahead with Es’hail 2 so quickly. Our two satellites Es’hail 1 and Es’hail 2 will primarily be TV broadcasting satellites operated at 25.5 degrees East and 26 degrees East TV broadcasting hotspots. Although, they will both carry out a number of other missions as well,’ explains Al Kuwari. 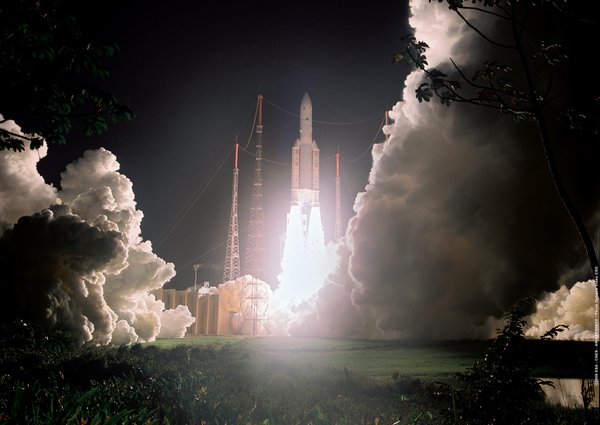 Es’hailSat has just released a request for proposal for Es’hail 2, the second satellite. In order to keep up high quality delivery of services, the company needs to work towards a larger fleet, says Al Kuwari, adding that 2014 will be a busy year for Es’hailSat. Not only will the satellite operator be progressing with its development plans, but it will also be playing a significant role boosting the state’s home-grown manpower capabilities, by providing its Qatari employees with further technological know-how and experience.

After partnering with Eutelsat for its first satellite, Es’hailSat is now ready to take on an autonomous role for its second satellite.

‘It’s probably fair to say that before 2010, no Qataris had ever worked in the satellite operator sector, so there wasn’t a pool of experienced people we could recruit to run the project. Consequently, the quickest way to get into service was to partner with an established satellite operator who could help us with the procurement process. Our first satellite is like an apartment block, with various apartments owned by different people but sharing the same location and the same physical structure. We call our part of the satellite Es’hail I and Eutelsat calls their slightly smaller part EUTELSAT 25B.

‘As well as procuring the Es’hail satellite, the launch and the launch insurance ourselves, we will need to build the satellite control centre at a dedicated site north of Doha. The satellite will be flown from there by our own Qatari staff, and the same facility will be used to transmit TV channels and other traffic to the satellite, again managed by our own Qatari staff. This is a key part of our vision to provide a secure, independent satellite system to meet the needs of Qatari stakeholders and others in the future.’

Es’hailSat has been satiating its appetite for knowledge in every way possible, explains Al Kuwari. The operator is committed to raising a team of diligent employees with keen expertise. Its plan is to set the path for the company’s future leaders.

The company has been involved in student sponsorship plans, which see Qatari scholars with interests in engineering go on to attain training from a reputable university with strong ties to satellite communications, says Al Kuwari.

‘When we started out there wasn’t a pool of experienced people that we could employ, so we had to build a team from scratch. If there are few Qataris with experience in the satellite operator sector, then we have to train and develop them ourselves, and we use every opportunity.

‘Four of our young graduate engineers were based at SSL and followed our satellite through every stage of the production process, actively participating wherever possible. They also followed a dedicated training course in the wider aspects of satellite communications and had the opportunity while living in California to visit NASA and other American institutions. Now that they’re back in Doha and fully integrated within our company, they’ve brought their attained skills to our new projects. Such was the success of this programme that we plan to repeat this on our second satellite procurement.

‘These steps are a part of our wider programme to develop our future leaders. We need to ensure not only that we have highly qualified and motivated staff to support our business today, but that in the future, when I’m enjoying my retirement, it will be a Qatari with many years experience who will be sitting in my office. But hopefully my retirement is not quite ready yet.’

Es’hail 1 covers the whole MENA region from the key 25.5° East Longitude orbital position. Using this hotspot, the 25.5° E/26.0° E neighbourhood, allows current viewers to tune their receivers to Es’hail 1 now and Es’hail 2 in future, without the need to change or repoint their existing dishes and enjoy true HD channels. With the state-of-the-art technology in Es’hail 1, viewers can enjoy the most reliable services with a full back-up and protection from interference.

Es’hail 1 provides advanced Ka band capacity, with over 300 Mbps data rate per transponder, allowing for solutions in both broadband and trunking.
With a beam covering Qatar and the surrounding area and a steerable beam that can be located anywhere on the visible earth from the 25.5 East orbital position, a two-way trunking link can quickly be established from such remote locations as London, Moscow, Madagascar, Rio de Janeiro, Kabul, Mumbai, Johannesburg, Reykijavik, and even Beijing.

Es’hail 1 is just the first step on a long path. From placing an order to having a satellite in orbit typically takes three years. Now that Es’hail 1 has been successfully launched and in commercial service, Es’hail 2 is in development and expected to launch at the end of Q4 2016. Es’hailSat are also defining Es’hail 3 and ultimately they expect to build up to a global fleet of satellites.

Es’hailSat, the Qatar Satellite Company, is a communications satellite operator headquartered in Doha, Qatar. Es’hailSat was established in 2010 to deliver services to broadcasters, businesses, and governments in the MENA (Middle East and North Africa) region and beyond.

With the ambition of becoming a world class satellite operator and the foremost satellite services provider in the MENA region, Es’hailSat started the operation of its first satellite, Es’hail 1, at 25.5° East with the most known customers in the region, beIN Sports and Al Jazeera Media Network. Es’hail 2, the company’s second satellite is expected to launch at the end of 2016 and be in commercial service in early 2017 at 26° East position.

Having both Ku band and Ka band capacity, the 25.5° East and 26° East hotspot positions enable Es’hailSat to provide the region with the most advanced and sophisticated services including broadcast, telecommunications and broadband. Es’hailSat’s expansion plan will continue with more new satellites in other prime hotspot locations, offering customers the most flexible and reliable service. Es’hailSat is also adopting the concept of ‘world-wide footprints’ through partnerships with leading regional and international satellite operators around the globe.

The Time Of Es’hail has been extracted from the ‘Special Features’ section from Marhaba Information Guide’s latest issue – Issue 60 – which is now available at the nearest bookstore and hypermarket next to you for only QR20.