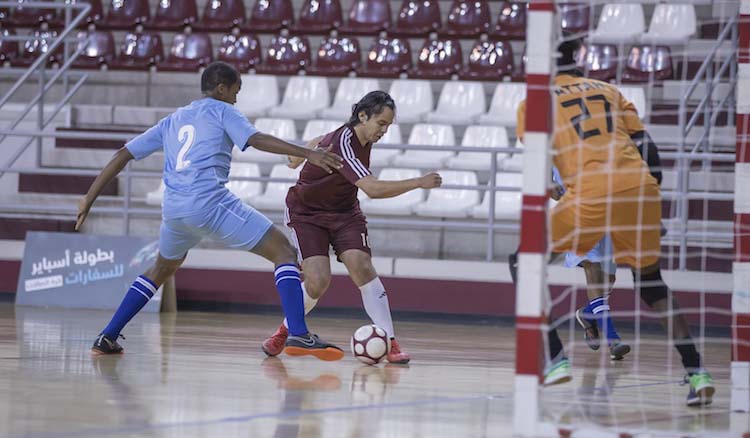 The Ladies Sports Hall at Aspire Zone hosted eight thrilling matches on Friday and Saturday during the opening of the 2nd Aspire Embassies Futsal Tournament, backed by senior representatives of foreign embassies in Qatar, in collaboration with the Ministry of Foreign Affairs (MOFA).

Group A matches kicked off with Kenya beating Ethiopia in a one-sided game that ended with a  7-1 score. A considerable number of Kenyan and Ethiopian fans watched from the stands, demonstrating the level of passion for sports that exists among Qatar’s diverse communities. Meanwhile, India revealed a hidden football talent with a fierce offensive against Kazakhstan, and coming out as victors and a 7-0 score.

Speaking about the opening matches, Director of Tournament Mohammed Mubarak Al-Kuwari, who also participated as part of the Aspire Zone team, said he was delighted to see all the enthusiastic diplomatic mission members and local community members play together. He said that the competition truly shows the diversity of people in Qatar.

The performances were outstanding and I can tell that the competition will build as we head towards the knockout rounds. We already received very positive feedback from the ambassadors during the first week and we look forward to welcoming more teams as we continue.’

HE Eric Chevallier, Ambassador of France to the State of Qatar, following their first match against Jordan, said that the sports event was a ‘well-organised event with a good atmosphere’.

… That is why we wanted to be part of it. The French and other embassies are part of life here in Qatar and, though we lost today, we’re glad we participated. Shukran Aspire!’

Deputy Ambassador of Kenya to Doha Daniel Tanui also expressed satisfaction with the tournament. He said that they’ve participated in many local events because they love sports.

We participated in 2016 and really enjoyed it. It’s a good initiative and it gives us an opportunity to enjoy sports while interacting with the local community.’

AZF has brought the tournament back for a second edition after many participating embassies requested its return. The tournament is organised in line with AZF’s efforts to promote a healthy and active lifestyle among community members of all ages, and to bring everyone together within an active environment. Football fans are also welcome to attend the tournament and cheer on their favourite teams.

For more information, visit the Aspire Zone website through this link.