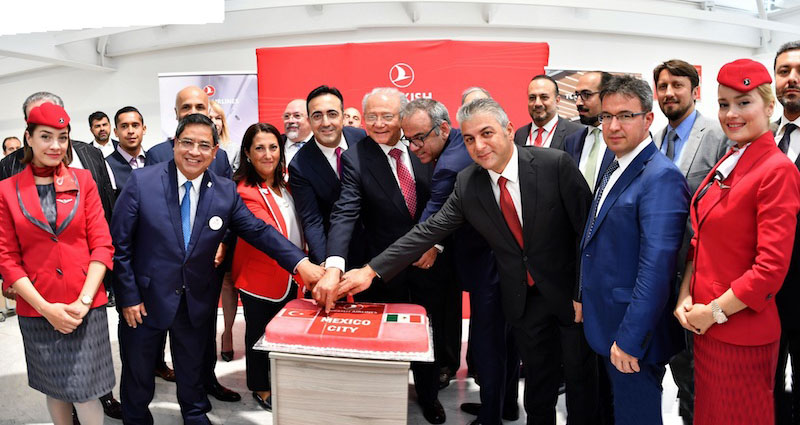 Turkish Airlines continues to enhance its flight network, especially after it recently launched flights to Mexico City – the second biggest city of Latin America and the capital of Mexico – and to Cancún, one of the favourite holiday centres of Central America.

The flights to Mexico City and Cancún, the 18th and 19th destinations of Turkish Airlines in the Americas, are operated three days a week on Istanbul-Mexico City-Cancún route. The service started earlier last August. With these flights, Turkish Airlines has added Mexico, the biggest country of Central America, to its flight network, thus offering a ‘connectivity opportunity’ to a greater area from Istanbul Airport.

During the press conference held in Mexico City International Airport for the inaugural flights to Mexico City and Cancún, Turkish Airlines Chairman of the Board and Executive Committee M İlker Aycı, said they continue to expand the borders of their flight network within the framework of the airline’s growth strategy.

We are happy to be able to connect these two important cities of the Americas to 125 countries around the world. From this day forth, our guests travelling to Mexico City and Cancún will be able to fly with comfort via Turkish Airlines. We believe our new flights will strengthen the ties between Turkey and Mexico in every way.’

Once the homeland of Mayans and Aztecs, Mexico City carries the signs of the first civilisations of Americas dating as far back as 2000 BC. It is a city of commerce and one of the more important trade centres in the American continent. Featuring over 150 museums that is second only to Paris in terms of number, Mexico City’s cultural heritage draws tourists from all over the globe. Mexico City is also near the ancient city of Teotihuacan and its pyramids and meet all expectations of tourist explorations with its colonial architecture, tasty Mexican cuisine, beautiful squares and numerous fun activities.

With fishing and agriculture as the main sources of income during the Mayan period, the city of Cancún boasted numerous important developments in astrology, physics and math and is now one of the most important tourism centres of Central America. The city hosts approximately four million tourists every year and has over 150 hotels. Apart from swimming, diving, and other fun activities, its history, cuisine and Underwater Museum makes it an ideal place for those looking for an unforgettable holiday.

To more information about Turkish Airlines, visit their website at turkishairlines.com or contact their call centre at +90 212 444 0849. You can also visit any of the Turkish Airlines sales office in Qatar.

Friday Garden and Family Brunch is Back at La Veranda, It’s Al Fresco and It’s Magnifico!