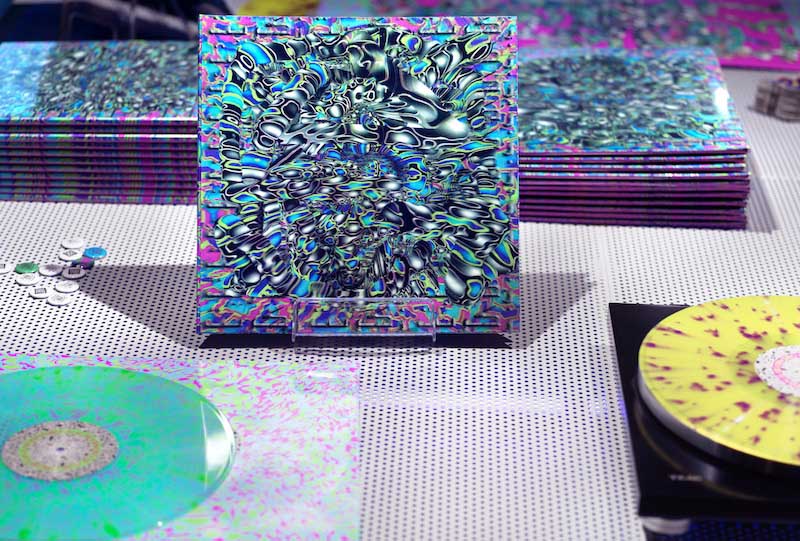 Music buffs and art connoisseurs can look forward to a limited-edition collectible to add to their personal collection – a first-of-its-kind vinyl double album titled Zekreet.

The album was released by Sonic Jeel, an artist collective made up of students, faculty and alumni from the Virginia Commonwealth University School of the Arts in Qatar (VCUarts Qatar).

The eye-catching artwork for the outer and inner covers include a 3D animation, while the vinyl records featuring 21 audio tracks are in translucent, decorated shades.

The albums were launched at a pop-up stall at Studio 7 in Msheireb Downtown Doha last week. The striking design for the covers was created by water with water, an experimental graphic publishing initiative. It will be on public sale at Studio 7 and at waterwithwater.com.

The inspiration for the album came from all the collaborations Sonic Jeel undertook over a three-year period. Several students who took the elective classes offered by Sonic Jeel at VCUarts Qatar continued working with audio even after the elective was completed, leading to 21 outstanding tracks that capture the originality of Qatar’s creative community. Their works are included in the album. Additionally, the album features audio tracks by VCUarts Qatar faculty members Michael Hersrud, Simone Muscolino and Joshua Rodenberg, who are part of Sonic Jeel.

The name ‘Zekreet’ came from the Zekreet village in northwestern Qatar near Dukhan, explained Muscolino. He said that the area is always popular for visitors and locals to explore the unique desert terrain, and is home to the iconic Richard Serra sculptures.

We really wanted Sonic Jeel’s first album release to connect to the idea of ‘place’ because Qatar has become the connecting point for a growing multi-national community.

The original collection of tracks is in a digital format. But as a community of visual artists and designers, Sonic Jeel wanted to transform the intangible digital files into a tangible, tactile and physical experience – hence a double vinyl album.

Hersrud added that Sonic Jeel collaborates with others to investigate sound, noise, electronic music, and audiovisual media within the context of Qatar and the Gulf region. He said that they celebrate the interplay of the sonic and the graphic toward a new generation of interdisciplinary makers.

Hersrud said that to curate and produce the album, they selected 21 tracks from over 100 sonic sketches. Through the curation process, they landed on a genre of avant-pop as a style because it mashes together elements of pop music while breaking conventional western structures.

We wanted an album that came from multiple sources and perspectives, but still, have a unified quality.

‘Zekreet’ is the first official album to be released by Sonic Jeel, in this genre. The group hope that the release of the album will set the tone for further sonic exploration in Doha, and become the foundation for future interdisciplinary offerings at VCUarts Qatar.

Collectively, the record features work by artists from Qatar, Oman, Bahrain, Egypt, Saudi Arabia, Yemen, Sudan, Palestine, Korea, the US and Italy, each bringing their own unique perspective.

All tracks (except Soul Maker, You Told Me So and Cobbled by Fire) were mixed and produced by Michael Hersrud and Simone Muscolino.

Studio 7 is a new Qatar-based design concept store featuring unique products from around the region that are rooted in Arab culture. The album was produced with support from Qatar Foundation and VCUarts Qatar.