What to See and Do in Al Khor

Al Khor provides a pleasant weekend break from Doha, and is easily reached on Al Shamal Road (Route 1) and on the newly re-opened Al Khor Coastal Road (Route 6). There are play areas and sun shelters along the Corniche, as well as photo opportunities at the old fishing harbour and the nearby mangroves, which are full of bird life. There is a small museum in the old police station, showing early life in this small town, as well as some archaeological discoveries from the Neolithic and Bronze Ages. Large public gardens to the north of Al Khor (signposted from Al Shamal Road) attract weekend picnickers. Al Farkiya Beach is another development just outside Al Khor: see the Sightseeing section for more information. Al Khor Community is home to a large expatriate population working in Ras Laffan Industrial City.

Adjacent to the upcoming Al Bayt Stadium in Al Khor is the new Al Bayt Park, which opened to the public on 11 February 2020, coinciding with National Sport Day. The park, which has a total area of around 1,331,900 sq m, includes a park, a water body, 56,000 sq m of pedestrian walkways, a 4,415 m-long running track, a 3,444 m-long cycling track, and a car parking area that can accommodate up to 6,000 vehicles and 300 buses, among other facilities. The park itself occupies a space of 944,000 sq m and has 369,585 sq m of green areas, including playgrounds. The park has 1,050 trees and six restaurants in addition to 10 locations for mobile cafes and fast food joints. It has 54 light columns powered by solar energy and an adequate number of kids’ play areas and games besides other facilities such as toilets and playgrounds. Located near the entrance is the barbecue kiosk, where diners will find a delicious selection of grills on the menu. Guests can also purchase raw marinated grills and grill them using one of the three equipped outdoor grill stations. Kiosks open from Tuesday to Saturday 12:30 pm – 10 pm.

The first and second zones of Al Khor Corniche Development Project opened in March 2018 to the public. The third zone is still underway. The three zones will cover an area of about 28,000 sq m, featuring 6,000 sq m of green spaces, play areas, 116 parking spaces, 256 seats and 46 umbrellas. 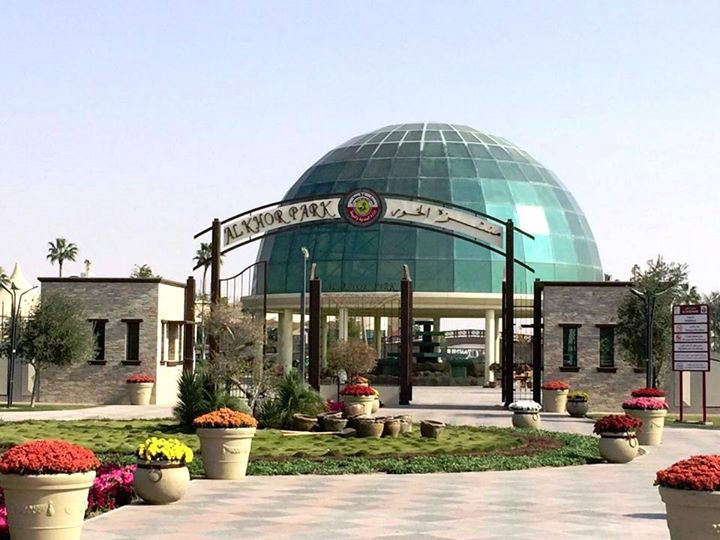 The new and improved Al Khor Family Park reopened in February 2020. The park, which first opened in 1983, closed in November 2019 for maintenance and redevelopment purposes. The 240,000 sq m park features a zoo, battery-operated train, restaurant, mosque, museum, mini golf area, wall mural, skating area, children’s play area, basketball court, food kiosks, drinking fountains, and an amphitheatre. One of the park’s main attractions is the mini zoo, which includes seven new sections with a large number of different birds and animals. There are 290 new animals, bringing the total number of animals to 315 (49 different species). There’s also an aviary, which contains a waterfall, a lake and is home to different birds. The park is a wonderful destination for those who want to spend some quality time away from the city rush.

Opening times: Open from Saturday to Thursday 8 am – 11 pm; Friday 2 pm – 11 pm; open Tuesday for women and children only. Admission: Adults QAR15; children QAR10 (up to 10 years of age). Train ticket price is QAR5 per person.

Al Khor Mall, sprawling over an area of about 55,016.67 sq m, is the first mall as well as the largest of its kind in Al Khor. With more than 100 outlets and a variety of dining options, fashion outlets, multiplexes and family entertainment centre, the mall enables you to indulge in a plethora of interesting activities other than shopping. The typical Arabic architectural style blended with facilities of international standards adds to its convenience and style. Furthermore, the mall comes with an expansive parking lot that can hold up to 1,500 cars. Best of all, Al Khor Mall boasts of a strategic location and is close to such highlights of the city as Beautiful Beaches, Qatar & Ras Gas housing complex and Jabal Jassiya that stands out for its beautiful rock carvings. Apart from these, the mall’s entire system and services have been controlled by the highly sophisticated Building Management System (BMS).

The tower can be seen overlooking the corniche at Al Khor. It was built in 1900. Nearby is the museum – learn about the myth of Ghilan and Mae, the region’s first female pirate, and see the displays of marine life.

The park is a miniature version of Al Khor Family Park. The 28,500 sq m park is home to a number of animals and birds. The mini-zoo is divided into two sections, with 10 glass cages and one giant cage with bridges, trees and nests. The park also boasts a room for vets to treat animals, as well as space to prepare their meals. The park is home to quarantine rooms and a laboratory for observation. This family-only park has a train, a children’s play area, a basketball court, amphitheatre and skating area, among other offerings. Electronic ticketing gates have been installed to facilitate visitors access to the park.

A family beach with a 1,350 m seafront just outside Al Khor. To get there, coming through Al Khor, go past Al Khor Mall, and at the next roundabout, turn left – there is a sign saying ‘Farkeeh Beach’. Follow the road for several hundred metres, past the sign for ‘Marina Scouts Club’, and keep going straight until the next sign for ‘Farkeeh’. Turn left and the beach can be seen in the distance. There are play areas, wooden sheds, watchtowers, and other facilities.

Opening times: Sunday to Wednesday 7 am – 10 pm; Thursday/Friday/Saturday is for families only, 7 am – midnight. Admission: Free.

Drive through Al Khor and go straight (first exit) over the first roundabout. At the second roundabout, go straight over again (second exit) and immediately take the right turn‑off, at the sign for Dolphin Energy. With the Qatargas/RasGas tower on the right side of the road, go straight for just over 5 km. Turn right at the sign for ‘Flower Each Spring’ and follow the road round to the right – this is an unmade road but suitable for all vehicles. The car park can be seen ahead – park here as cars cannot go any further. ‘Purple’ Island gets its name from the dye extracted from the sea snail (a shellfish called thais savigny), evidence of which can be found all over this coastal stretch of land. The ‘island’ is surrounded by mangroves and is accessed via a causeway (broken away in parts). Climb to the top of the jebel for a 360° view of Al Khor.

A large area of vegetation attracting varied bird life, including flamingos and herons, Al Thakhira mangroves can be found just north of the seaside city of Al Khor, and present a large expanse of natural greenery in sharp contrast to the surrounding desert landscape. Qatar is home to the Avicennia Marina, also known as the grey or white mangrove tree, communities of which form several forests around Qatar’s shores. The largest area of mangroves – and the oldest – can be found around Al Thakhira and Al Khor. A great way to explore the mangroves is by kayak, available from several tour operators and specialist companies. All of these can be booked in advance, and many companies offer both morning and afternoon trips. For further information, contact one of the local tour companies.

Located at Al Khor Airport, Qatar Flying Club (QFC) is a private flying company licensed by the Qatar Civil Aviation Authority (QCCA) to provide recreational flying to its members, and trains flying enthusiasts to become pilots as well as providing discovery flights over the country. At QFC, facilities are available for operating privately owned general aviation aircrafts such as gliders, ultralights, gyrocopters and microlights. QFC currently has over 150 members, the majority owning planes. QFC welcomes residents of Qatar from all walks of life, both male and female.

Ministry Guidelines to Protect Yourselves from COVID-19

Qatar Airways enhances its 5-Star experience with the iPad

More Powerful Line Up: The New Panamera Models from Porsche

Book Your Next Corporate Event at Alwadi Hotel MGallery