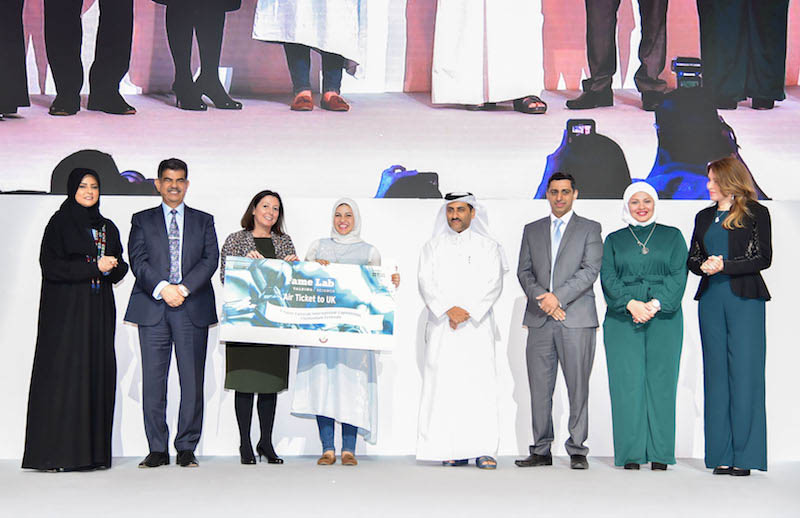 For the fourth consecutive year, FameLab, one of the biggest science communication competitions in the world took place in Qatar. FameLab was initiated by Cheltenham Science Festivals in the UK, and brought to Qatar by the British Council in partnership with Qatar National Research Fund (QNRF) – a member of Qatar Foundation (QF) – and supported by the Ministry of Education and Higher Education.

FameLab is a competition for scientific communication where the participants present a scientifically proven idea to a general public audience in just three minutes. The judging is based on clarity, scientific content and performance on the stage. The participants in FameLab are divided into two categories: students (15 years old and up), and adults (including teachers and researchers).

Nearly 300 people took part in this year’s FameLab competition. All applicants were trained and prepared for the finals and 13 finalists were selected to participate. Participants who made it to the finals received an intensive science communication training course delivered by experienced and qualified international science communicators from the UK.

The National Final was held on 13 March 2019 as part of the National Scientific Research Week conference held by Qatar National Research Fund and the Ministry of Education and Higher Education. More than 2000 people attended the finals where the winners were announced at the end of the ceremony.

The first three places from the student category were won respectively by Abdulla Al- Nasr from Qatar Science and Technology Secondary School, Abdulla Al Aljanahi from Qatar Science and Technology Secondary School and Ahmed Adel Abdul Hafez from Ahmed bin Hanbal Independent School. Aya Aboulazm from the Pharmacy College won the first place in the adult category and will represent Qatar at the international finals at Cheltenham Science Festival in the United Kingdom. Dana Al Khalifa, College of Pharmacy from Qatar University, won second place in the finals.

My dream is not to change the world, I just want to become the most inspired version of my own self. Only then can I influence others to be inspired as well, and we all can create an endless ripple of change. FameLab was the perfect platform to revive this inspiration because it taught us to look differently at everything and that science can be fun and entertaining if you have the right perspective.’

I am delighted at the overwhelming response that FameLab has had again in Qatar this year. It has involved a large number of school students and young researchers. The success that we have had is the fruit of an outstanding collaboration with our strategic partner, Qatar National Research Fund, and the Ministry of Education and Higher Education. Being able to talk about science, explain science and make science relevant to young people and to engage their interest is a skill that is important in order to ensure the commitment and success of Qatar’s next generation of young scientists.’

We are proud of our partnership with British Council Qatar and the Ministry of Education and Higher Education in organising this international science communication competition for the fourth consecutive year as part of the National Scientific Research Week. This competition is an important initiative that is supporting us to attract more students towards scientific research and innovation.’

Ten Reasons Why You Can’t Miss this Year’s QIFF!

The Third Edition of QITCOM Comes to an End