Meeting its mitigation goals in line with Qatar National Climate Change Action Plan 2030, the Museum of Islamic Art (MIA) recently received the globally recognised carbon neutral certification, making it the first museum in the MENA region and in Asia to achieve carbon neutrality.

To achieve the status of carbon neutrality, MIA went through comprehensive audits aimed at measuring and verifying the GHG emissions linked with the operations and services of the facility.

Acknowledging the achievement, an awarding ceremony was held at MIA in the presence of senior members of Qatar Museums, Det Norske Veritas (DNV) in its capacity as the verifying organisation and the Gulf Organisation for Research and Development (GORD), which worked on the project as an advisory partner to support MIA in achieving carbon neutrality for a one-year reporting period starting in 2021. 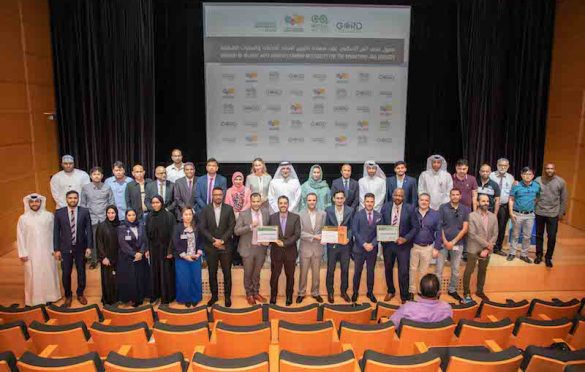 According to Engineer Dhabya Jamal Sayar, Director of the Facilities Management Department at Qatar Museums,  climate change has emerged as one of the greatest challenges faced by the world today and adverse effects are visible across the globe and in Qatar. Qatar Museums, a leading organisation in Qatar, has embarked on a journey of low-carbon transformation of its museums.

To initiate the low carbon transformation process, Qatar Museums selected the MIA to achieve carbon neutrality for its operations and services for the reporting period covering 2021. With the help of GORD, they identified low-carbon interventions and developed a carbon neutrality plan.

DNV, being the third-party auditor involved in carbon neutrality, has verified and validated the GHG emissions and has certified MIA as carbon neutral for 2021.

Qatar Museums is proud to have commenced this journey, which resulted in MIA becoming the first museum in the MENA region to achieve carbon neutrality.

GORD Founding Chairman Dr Yousef Alhorr said that as repositories of artefacts, museums preserve the heritage, culture and spirits of nations over time. The purpose it serves is intrinsically linked with the idea of environmental sustainability that aims at conserving natural resources for generations to come.

Like governments and corporate entities, museums too, have a bigger role to play in meeting the goals of the Paris Agreement, says Alhorr. He said that by supporting environmental conservation alongside cultural preservation, Qatar Museums has demonstrated true stewardship as a forward-thinking organisation investing in the future of the nation as well as the planet.

GORD is a proud partner of Qatar Museums’ journey towards low carbon development.

In order to reduce its GHG emissions, MIA with the help of GORD identified low-carbon interventions and developed a carbon neutrality plan.

In order to audit and validate the GHG emissions and carbon neutrality claims/plan, internationally reputed DNV Middle East was appointed to carry out a third-party audit based on the international standard – PAS 2060. After completion of the successful audit, DNV certified that MIA has achieved carbon neutrality for its operations and services for the year 2021.

Speaking on behalf of DNV, Area Manager Prakash Tikare said that carbon neutrality is becoming the monument of the net zero commitment to create a value chain impact with international standards and implement best business practices. In partnership with GORD, he said that they are proud to support MIA and provide a strong direction for its stakeholders towards the net zero commitment of the Qatar government.

He said that they commend the initiatives of MIA, congratulating it for being a frontrunner in Qatar’s nationally determined contributions and for setting a benchmark in the GCC.

The scope of activities included in assessing MIA’s carbon footprint included the operational impacts linked to electricity and water consumption, waste generation and visitors’ commute to the museum.

In the assessment process, all major GHG emission sources were accounted for by using international protocols.