Qatar Chamber (QC) highlighted the most prominent trends in the Qatari economy as well as statistics related to foreign trade and private sector trading in their monthly economic newsletter this June.

The report, prepared by the Researches and Studies Department of Qatar Chamber, featured views of the business community on the issuance of the Public-Private Partnership Law which emphasised the private sector as a real partner of the state in implementing many development projects.

It highlighted that the consequences of the blockade and the COVID-19 pandemic only demonstrated the real capabilities of the private sector and its eligibility to implement major development projects within the framework of economic diversification and attracting domestic and foreign investment.

Many different industrial sectors such as chemicals, plastics and petrochemicals, are expected to achieve significant expansions during the next few years parallel to the continuous increase in the production of LNG from the North Field. The report also pointed to the development of the industrial sector in the country during the last few years, and its remarkable successes despite the regional and international economic challenges and variables.

The newsletter highlighted a study conducted by QC’s Food Security and Environment to identify the production inputs required for plant and animal farms during the current phase, which should be included in the state’s food security concerns and strategies, and outlined the advanced rankings of Qatar in many international development indicators.

According to the Arab Monetary Fund, Qatar topped all other Arab countries in terms of participation of women in the labour force (58%), followed by Kuwait (49.3%).

Qatar also ranked first in the Global Peace Index for 2020 in Middle East and North Africa (MENA) and 27th in the global index ranking. The ranking was issued by the Institute for Economics and Peace in Sydney, Australia.

Similarly, the country ranked first in the Arab world and 16th globally in the Societal Safety and Security index, making Qatar one of the safest countries in the world. This accomplishment, says Qatar Chamber, stressed the country’s leading position worldwide in safety, noting that it is corresponding with the QNV 2030 and its main goal of maintaining security and safety, and therefore enhancing Qatar’s investment climate.

The state also ranked 31st globally in the Economic Freedom Index among 168 countries, according to the 2020 Index issued by the Heritage Foundation in Washington.

The newsletter included a report on the state’s foreign trade for April and trade of the private sector, according to the certificates of origin issued by QC. According to the figures of the Planning and Statistics Authority for April 2020, the total value of foreign merchandise trade statistics amounted to QAR19.3 billion. 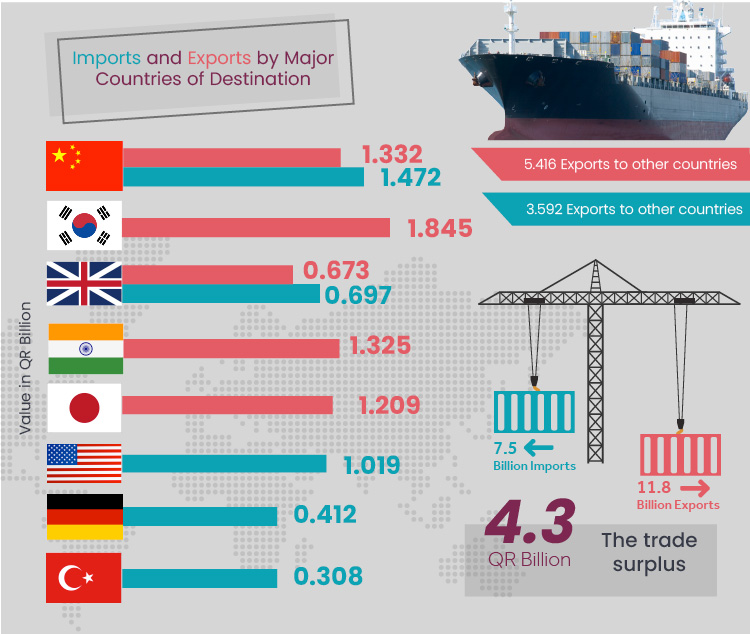 In April 2020, China was the leading country of origin for Qatar’s total foreign trade (imports and exports) with about QAR2.8 billion, a share of 14.5% of the total foreign trade. According to the certificates of origin issued by QC in April, the private sector’s exports reached QAR572 million.

As for the private sector’s trade according to the certificates of origin issued by QC for exporting companies, exports through the ‘General Model’ certificate of origin form constituted the largest value at QAR298 million, followed by exports through GSP – about QR 178 million and GCC model with a value of about QAR45 million.

Exports through the Unified Arab certificate came in fourth place with a value of QAR43 million, followed by the Unified GCC Certificate of Origin to Singapore which amounted to QAR 8 million.

Marhaba Review: Out for Lunch at Mandarin Oriental, Doha

Qatar Airways Paid Out Over US$1.2 Billion in Refunds Since March