“It’s never too late to learn,” is an annoying and condescending refrain often used like a sniper’s bullet to mean “you just can’t be bothered, can you?”

One Brother Rue still believes piano will one day be his forté, but he needs to be reminded that his gnarled fingers and arthritic thumb may preclude any attempt at perfecting even a prelude.

“Take up gardening instead,” was the rather unsympathetic suggestion from across the table. However, we both agreed that pursuit of culinary knowledge should last a lifetime and be passed on through generations.

“After all, someone somewhere was the first person to boil an egg,” commented one Brother Rue with sage-like seriousness. Thus, establishing the origins of derivative egg dishes can be problematic verging on the impossible, he argued.

He went on (and on) to conclude that a distinct “Darwinism” existed to explain the evolution of mankind’s taste in food. “Don’t be such an oeuf,” seemed an appropriately blunt reply.

We had ventured into Souq Waqif for an assignment to celebrate the reopening of the Al Matbakh rooftop grill, nestled atop the alluring Arumaila Boutique Hotel. A new north Indian menu had been created and with much delight we were guided through every step by proud New Delhiite chef Pradeep Kumar.

He was a confident and inspiring young craftsman with an attitude as refreshing as the welcoming cocktail comprising kumquat, fresh rosemary, passion fruit and pineapple juice (a buoyant saffron lassi, originally from the Punjab, followed on completion).

“A chef can represent a region but not all of India,” Pradeep articulated. It was a statement delivered with simplicity to underline that learning the entire cuisine of such a vast nation would require reincarnation several times over.

Anjabin Siddiqui, effusive marketing & PR executive for Souq Waqif Boutique Hotels, had met us on arrival and we were immediately impressed by the collective enthusiasm of all the team, which was led by redoubtable manager Arshad Khan. 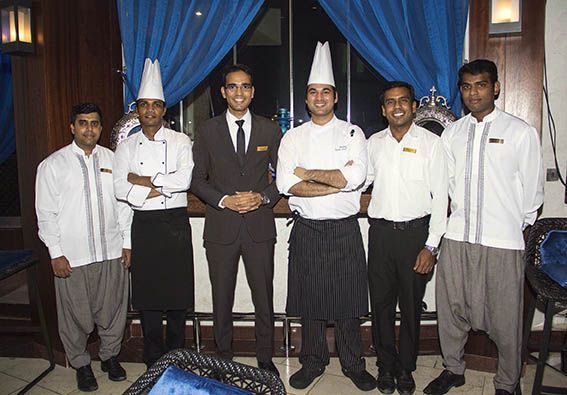 And how much we learned from all assembled. The “best” basmati rice comes from Dehradun, Uttarakhand, near the Himalayan foothills and needs to be aged for up to five years (even 10) to elicit the optimum aroma. One Brother Rue, who shall remain nameless, could not help but interrupt. “Well, while waiting, there would be plenty of time for yoga,” he muttered.

But Pradeep would not be perturbed or distracted. “India grows 70% of the world’s spices,” he said. Such snippets were excavated from an encyclopaedic mind to emphasise the creative challenges faced by the more inventive native chefs.

He was trained in the classical style – he referred to his fayre as “royal” food in deference to the times of Mughal emperor Shah Jahan – but has deftly introduced elements of “street” food to develop an adventurous new menu.

So, following a short “heated” debate about the relative virtues of Kashmiri chilli and degi mirch – both do a fine colourful job, by the way – we were under starter’s orders after tasting a teaser of roasted pappads with mint chutney, tamarind chutney and onion pickle.

Paani poori, delicate stuffed semolina puffs with a banana twist, have a definite “street” influence, as do the samosa chole chaat. These were considered exceptional because wild imagination is often required to enliven chickpeas. Preparing them with a pungent curry sauce, sweet yoghurt and mint to accompany the lightly crisp vegetable parcels produced an exciting burst of flavour.

Experimentation with batter has led to notable advancements across world (and, yes, considerable credit must go to Japan) as we diners are gradually weaned off artery-clogging emulsions.

And chef Pradeep’s contribution is awesome: Amritsari macchi featuring perfectly cooked hammour strips wrapped by a subtle coating of semolina with hints of chilli, ginger and garlic. We whispered that they were deliberately served with wafer-thin potato crisps just so he could ask if we enjoyed our fish and chips.

To complete the appetisers, chicken tikka made a suitably steaming entrance. Again, the experience became enlightening. It is rare for one Brother Rue to opt for chicken breast over more versatile thigh fillets in home cooking so he was happy Pradeep shared a similar view.

Thighs are more conducive to hours of marinating (in this case 12) and they stay moist for longer. Our chef is also likely to prefer good quality labneh over yoghurt during preparation because it has a lower water content. A decent unexpected tip.

Now, we are both aware that Britain is quick to claim intellectual property rights over certain inventions and chicken tikka masala is merely one example. But this ubiquitous dish has been traced to the Uttar Pradesh region, again from the days of Mughal emperors.

And since independence, it has evolved simply as butter chicken via the famous Moti Mahal restaurant in Delhi. “Never let historical fact scupper a good story,” said one Brother Rue as he mopped up his remaining rich tomato and fenugreek gravy with potato naan.

There was less debate over the authenticity of paneer palak, a most pleasing combination of blanched spinach, mint, coriander and superb curd cheese made from Himalayan yak milk.

The Punjab indisputably lays claim to the classic dal makhani for which most chefs, including Pradeep, favour the more robust black urad lentils to blend with kidney beans, butter and cream.

There is much to admire about the new concise menu at Al Matbakh grill but the nalli nihari was considered outstanding. It is a traditional Muslim dish of spicy lamb shanks or marrow bones once consumed in old Delhi as a hearty breakfast.

Pradeep prepares his version in a 12-spice gravy that, importantly, includes fennel seeds and cinnamon. Once marinated it is cooked for about four hours and the result is joyous. Wonderfully aromatic biryani prepared with the unmistakable fragrance of mace makes for an ample companion dish.

One Brother Rue vowed to resist any dessert, but when they arrived temptation proved tortuous. So, after several hours, we sampled the gajar ka halwa (carrot shavings, raisins, nuts, khoya, ghee and milk) and zafrani ras malai (cheese dumplings with saffron on sweet fried bread).

We had been royally entertained and indeed educated. However, the learning curve became a touch too steep on departure for one Brother Rue who was told with mischievous glee that Worcestershire sauce originally came from Bengal.

“We would gladly return chicken tikka masala to its rightful owner if India does not repeat that outrageous claim,” he said, only half joking.

The Rue Brothers review restaurants exclusively for Marhaba. They have spent a combined 40+ years in Qatar and think they know their onions, and kofta kebabs, by now

Click here for more reviews by The Rue Brothers.

A Night to Remember with Nobu and De Niro

Posted On 16 August 2017
Food and Restaurants

Thai Kitchen Opens With A Buffet Of Thai Treats!