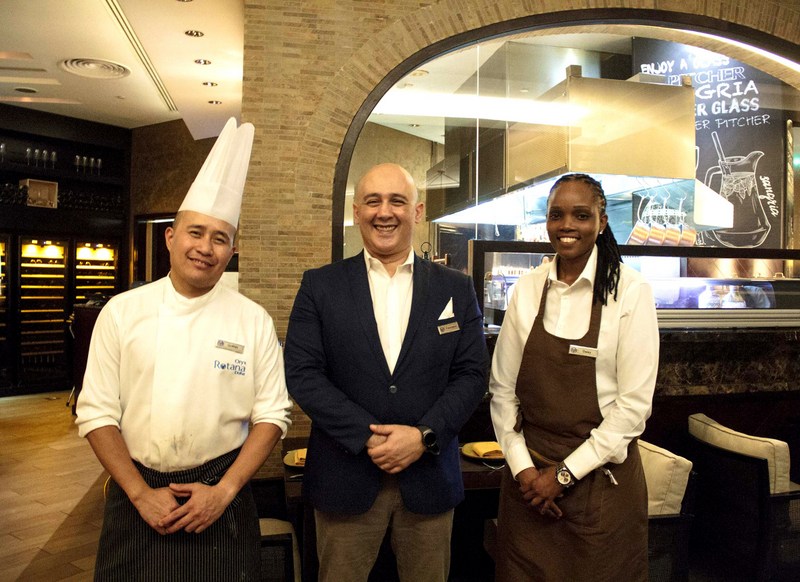 The Rue Brothers back at The Cellar

“Do you realise?” asked one Brother Rue while waiting for our latest assignment. “No one has invited us back before. Not even Nobu.”

“Perhaps we have gone from A-list to blacklist,” the other replied, hoping a little levity may obviate an onset of prolonged paranoia. “And I told you last year’s incident with the sous chef might have consequences.”

Happily, any feelings of indignity and low self-esteem did not endure because the next day we were handed a return ticket to The Cellar restaurant at the Oryx Rotana Doha. Since the hotel opened in 2010 it has become a leading destination for expats lured by the excellent Friday brunch and lively jazz club.

The Cellar is also a venue that thrives on repeat business, for which the food & beverage and marketing teams deserve credit for continuous creativity. Offers abound at all outlets but we both made a note to sample the “Lazy Lunch” offered at The Cellar on weekends. “It was the word ‘lazy’ that clinched it for me,” remarked the inherently indolent Brother Rue, who shall remain nameless.

Without wanting to cause a stampede and jeopardise our opportunity to book before Christmas, a three-course set meal (QAR95) is available between noon—7 pm with an enticing option to indulge in a beverage package (QAR90) over a three-hour stint.

There have been subtle but significant changes at The Cellar since our last visit. An extension has increased restaurant capacity by 35-40 covers, new handsome hardwood flooring has been laid and the kitchen is now encased by glass panels to contain the aroma of the cooking.

One Brother Rue was even complimentary about the ambient guitar music, which he described as “pleasantly unobtrusive”. It was most certainly an evening of surprises. While we were happy to see that the original informal bar area with high tables remains, the renovation left us with a lasting impression that The Cellar has graduated from a bar that sells food to a fully fledged elegant restaurant.

That was the aim of specialty outlet manager Francesco Fazari, who greeted us with typical Italian exuberance. It was clear throughout the evening that he has developed an acute attention to detail so when he told us he had spent four years at the Ritz-Carlton Shanghai we understood why.

In our first review we noted the impressive number of Michelin-starred restaurants and celebrated chefs found in Spain, which at the time of writing still included Catalonia, but while The Cellar certainly has a strong Spanish influence it is best described as eclectic Mediterranean.

After delicious homemade stuffed focaccia served with a parsley and anchovy dip, a tapas selection was considered mandatory. Prawns Malaga prepared with garlic butter, spiced paprika, cherry tomatoes and capers deserved their rapturous reception and the bite-sized parmesan dusted crispy cauliflower with a hazelnut and chilli-tomato dip was satisfyingly light.

We had been told that the menu had also undergone an attractive makeover so one Brother Rue perused it with serious intent hoping to find that the beef cheeks, slow-cooked with red wine, had made the cut. They had. On the way it was agreed that this simple delicacy would be the only repeat dish and, again, we were left to drool.

For a salad dish it would have been rude to dismiss the buffalo mozzarella with heirloom tomatoes and salsa verde. Indeed, there was an extra spring in Francesco’s step as he approached us with Campania’s incomparable “pearl of the table”.

A section of the new menu includes a triumphant trio of main courses under the heading “Gifted by the Grapes” for those who insist on having wine in their meal. Alcohol dissipates while cooking, of course, so diners need only plead guilty to one count of wondrous gluttony.

Duck confit, a charming concoction perfected over centuries by fastidious French cooks most notably from Gascony was certainly tempting. We are often curious about the origins of classic dishes that require several hours and sometimes days before they are ready to eat. The experimental phase must have lasted a lifetime, we thought. The absolute antithesis of fast food.

Well, duck confit is now a recipe to cherish and so is the Sangre de Toro braised beef short ribs, which received the final nod after vigorous debate. Accompanied by glazed root vegetables and creamy mashed potato the ribs (served off the bone) were sublimely succulent. Even that culinary cliché “melted in the mouth” inadvertently crept into conversation.

Having recently discovered an ancestral line extending to the boot of Italy, one Brother Rue feels obliged to order risotto whenever it graces a menu. Arborio from the Po Valley between Milan and Bologna is his absorbent of choice as if no other exists. Francesco confirmed that his risotto al funghi, delightfully flavoured with wild mushrooms, herbs and parmigiano-reggiano, passed the stringent geography test. And most welcoming it was too.

Early on we noted that our knowledgeable host was a natural Europhile who embraced the rich cuisine of all the continental countries so we judiciously decided not to mention Brexit. And he was doubtless correct when he told us Portuguese cataplana dishes are served only in a couple of outlets in Qatar.

Cataplana is named after an ornate deep copper pan with a lid that can be secured to preserve flavour during slow cooking. Traditionally, a rich fish broth is simmered for several hours before clams are added (Amêijoas na cataplana).

The Cellar’s cataplana variation favours lobster and prawns with chunks of hammour and we could not possibly argue with that. For additional flavour, fennel (a much underused aromatic herb), sweet peppers and tomatoes were added to produce a memorable treasure trove of seafood delights.

Then Francesco, who had been in perpetual motion all evening, ambled over to discuss desserts. He urged us to forsake the tiramisu, which must be considered an act of treason in Italy, and opt instead for the traditional churros.

Widely revered as a simple snack throughout the Iberian peninsula, churros comprise choux pastry rolled into sticks that are subsequently deep fried. They are surprisingly light so the temptation to dip them in chocolate sauce and vanilla cream can prove irresistible.

As we departed, bestowing fulsome praise on Francesco for The Cellar’s seamless transformation, one Brother Rue said simply: “If this is the Mediterranean diet, include me in.” Enough said.

New DoubleTree by Hilton Welcomes Guests with The Cookie

One Day in Paradise at Banana Island Resort