The State Mosque is the most prominent mosque in the country, not only because of its size but also because it brings some of the leading Islamic scholars to Qatar to give lectures and perform prayers, especially Friday prayers and Tarawih (non obligatory extra evening prayers) during Ramadan. Every Thursday, a public lecture takes place after the evening prayers. 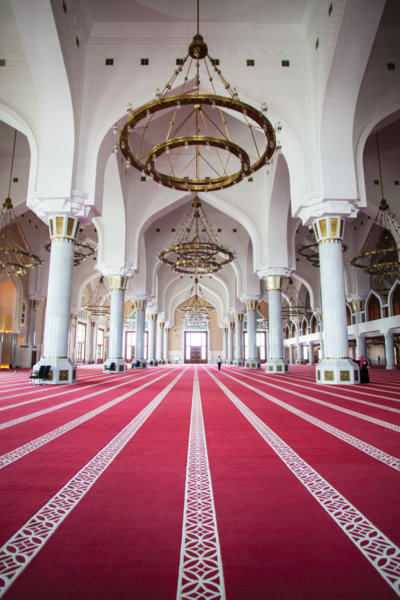 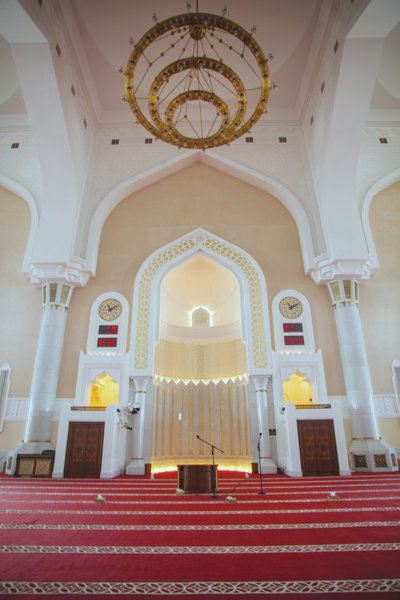 The mihrab at the State Mosque

The mosque features a mix of both traditional Arabic and modern architecture, preserving some of the traditional Islamic architectural elements. Enormous and spacious, the mosque includes separate praying and ablution for males and females, three libraries, Quran memorising area, a minaret, large open outdoor prayer spaces and parking. Although the mosque can fit 30,000 worshippers, the central air-conditioned hall can accommodate only around 10,000 men. In addition, there is a special enclosure for VIP’s to pray.

There are multiple entry gates to the mosque with only one entry gate to the ladies praying area, which overlooks the men’s praying area and can accommodate approximately 1,200 women. The libraries are only accessible in the men’s praying areas. Two of the libraries consist of Islamic books in Arabic whereas the third library consists of books on Islam in various languages including English, French, Spanish, Italian, Hindi, Urdu, Tagalog, Amharic, Malay, Chinese and Indonesian. There are various parking areas at the mosque for about 3,000 cars, spread over nearly 15,000 sq m.

The mosque is named after the reformist, pioneer and Muslim theologian of the 18th century, Muhammad Ibn Abdul Wahab (1703–92). Born in Najd, Saudi Arabia, Abdul Wahab advocated purging Islam of what he considered to be impurities and innovations. His great movement, known as Wahhabism, is the dominant form of Islam in Saudi Arabia. It is known for its strict observance of the Quran. Those who follow Abdul Wahab and Wahhabism are referred to as Wahhabis.

The ideology of Wahhabism is to reject traditional scholars, scholarship and practices under the guise of ‘reviving the true tenets of Islam’ and protecting the concept of monotheism. Abdul Wahhab’s brand of ‘purification’ of Islam consisted of prohibiting many traditionally accepted acts of worship, reverence of the person of the Prophet Muhammad and the pious saints, and burning books containing traditional prayers, interpretations of law and commentaries on the Quran and Hadith, which are the collections of the reports of the teachings, deeds and sayings of Prophet Muhammad. He encouraged his followers to interpret the holy books for themselves and to act on their interpretations in light of their own understanding, regardless of their understanding of fundamental principles or lack thereof. Anyone who did not profess to this new ideology was considered outside of the realm of Islam – an apostate, disbeliever or idolater thus making the shedding of their blood and confiscation of their wealth permitted.

Ibn Saud, who was the first monarch and founder of Saudi Arabia, revived Wahhabism in the 20th century. The house of bin Saud continued to maintain its politico-religious alliance with the Wahhabi sect through the waxing and waning of its own political fortunes over the next 150 years, through to its eventual proclamation of the Kingdom of Saudi Arabia in 1932, and then afterwards, on into modern times. Today Muhammad Ibn Abdul Wahab’s teachings are state-sponsored and are the official form of Sunni Islam in 21st century Saudi Arabia.

It is unknown why the State Mosque has been renamed after Imam Muhammad Ibn Abdul Wahab.

If you plan to visit the mosque, remember the following:

It is believed that the mosque consists of 99 domes in relations to the ’99 Names of Allah’. However, that is not true. As mentioned, the mosque has 28 major and 65 minor domes, totalling 93 domes.

Allah is the Arabic word for God or the ‘Supreme Being’, commonly used by Muslims to refer to their God in Islam. In Islam, however, Allah has an additional 99 names. Referred to as ‘Asmaa’u Allah Al-Hosna‘ in Arabic meaning ‘The Beautiful Attributes of Allah’, the names are regarded as adjectives or descriptions of God.